We sure are taking our fair share of PCR-tests at the moment! Nathan of course gets them at work, both  after he has been flying and on the mandated dates after, but also scheduled at random on his roster.

And also, for all students to be able to stay in school full time from now on, it has been decided that all kids above the age of 12 will have to do a PCR every 10/11 days. The schools have been put on a rolling schedule, and today it was RIS turn. We had to go to the drive-through again, so I took the kids straight after school. It could've taken quite a long time as the queues were building up once we got there, but we were so lucky as they opened a new lane just as we arrived..! Lucky-la-la! 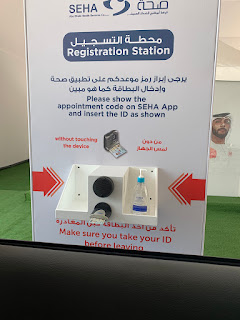 Then 10 minutes after we got home, the Random Testing Bus turned up in our compound! It's part of the National Vaccination Programme; they canvas through all the different areas of Abu Dhabi escorted by police, knock on doors and test everyone in the house, for free.
Luckily as the kids had literally done a test an hour previous (ha, ha, what a coincidence!) they were let off; and with Nathan at work, I was the only one. It was super efficient, I had to register by the window of the bus on one side, then go sit down and have the PCR done on the other side. 30 seconds tops!

I was actually very happy to do one, as my latest test was when Linnea and I landed here back in August. I haven't needed to to do one since. Since I have now passed my 28 days since the 2nd dose of the vaccine, my Al Hosn App should (with a negative test) now show green with an 'E' tomorrow! Exciting!