Yes I must admit it had been a while since I had tied one on like I did last Saturday night... It sure took me a while to become myself on Sunday morning...
We had promised a friend from Abu Dhabi to get out and cheer for him during the Copenhagen Ironman - lucky they keep at it for quite a few hours so that we still had time come the afternoon!! :) 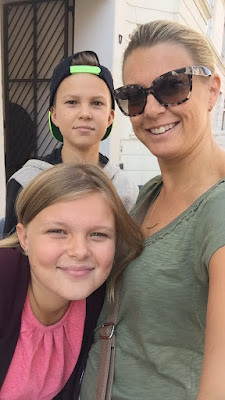 We made our way down to Langelinie as not only did we discover that trying to identify people while they were riding their bikes was impossible, but the kids wanted a better look of The Little Mermaid statue. 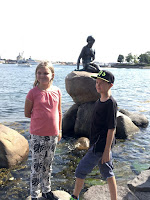 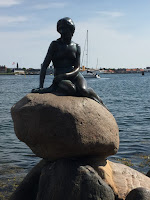 So we found a good spot along a long stretch where the Ironman participants were running past us in both directions. We got ourselves some ice cream, and then we waited. 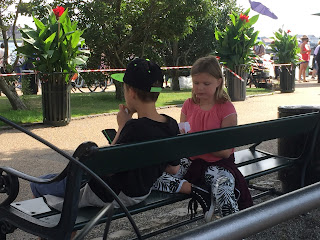 We saw him! There's Martin in the picture, to the right of the guy in green (he's in the sleeveless with 'Hybholt' written on his bum). We managed to shout and cheer him when he ran past both ways, so we were very pleased with that. 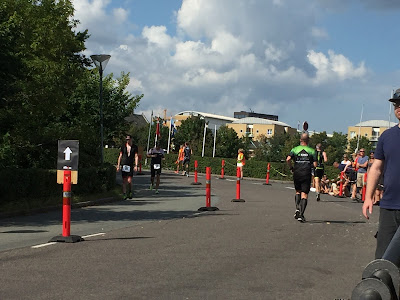 We also cheered on another rather old friend of mine, Micke. We were reps together on Lefkas, some 20 years ago, and no I haven't seen him since; but I saw on his Facebook that he was going to participate, so I looked out for him too - and saw him!
By the way, he finished 13th out of 500 in his age group (40-45), and came in 82nd place overall out of the total 3000 competitors!! Oaw, just oaw!

I loved the afternoon the kids and I had. The weather was perfect (maybe not so much for the competitors...) warm and sunny, and the atmosphere was really happy around the race course. So many people were out and about cheering on the athletes.
The kids were chilled and relaxed, and got along great with each other; and I felt super grateful and happy inside - I just walked around and smiled at everybody. I love Copenhagen.
Posted by MrsW at 11:26