We stopped over for a night again in Bunkeflo, although this time only Pia and Martin was home as the girls had already gone to their Farmor for Christmas preparations.

Pia had prepared a traditional 'uppesittarkväll' for us.
The 'uppesittarkväll' in Sweden is the evening before Christmas Eve, a night spent normally preparing for what's to come - preparing the food, wrapping the presents, dress the Christmas tree (well, not me obviously as I do mine already by the 1st of Advent!) etc. It captures the sense of anticipation ahead of the big day - us Swedes celebrate on Christmas Eve.

Also, it's a night to gather around the TV, where there are always the same shows on to serve as a backdrop for the festive preparations: rhyming help for your gifts, seasonal entertainment etc. For the last 25 years, there have been a show broadcast live which is called 'Bingolotto', a lottery game which most people take part in. This started after I left Sweden so it's never really been a tradition of mine; and even though Pia had never done it before either, she had bought a few shares, so that we could join in the excitement! 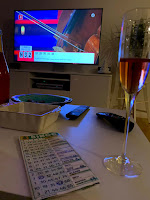 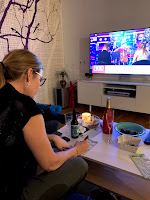 We had lots of fun getting in on the action, but even though there was a huge amount of trips, cars, gift cards and cash up for grabs - all we won was a new share, on Pia's lottery ticket. Better luck next time!
Posted by MrsW at 15:40