Yes, there is a lot going on with Oakley at the moment, obviously. It's like having a little baby, and recording every milestone!
The dog trainer told us that we shouldn't hesitate to bring Oakley along anywhere we can, to make him used to different environments and above all, many different people. Apparently he doesn't necessarily need to meet other dogs (he already knows how to behave around dogs thanks to living with his mum and siblings until we adopted him) - he needs to learn how to behave around humans.

So last night, we took him to rugby training! 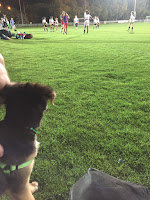 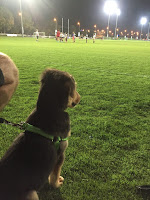 Sunday nights the ZSC is a lot more quiet than during the Thursday sessions, and we stayed far away from the most noisy part. It was scary enough for our little puppy, with lots of people running around in every direction, not just the players on the fields, but also people jogging around the pitches; whistles blowing, people shouting, blazing lights and rugby balls bouncing everywhere.

We went for a bit of a walk, then sat and watched for a while - and then he decided to fall asleep! Too much excitement for one evening I think!
Posted by MrsW at 14:22