We have a few recurrent happenings on our UAE calendar and this weekend it was time for one of them, the HSBC Youth Rugby Tournament. Linnea is not doing rugby this year, but Lucas and his now U14 team participated.

We were all up in Dubai, as Nathan and I had been out the night before with our ex-neighbours Chad & Kristen for Kristen's birthday; so we had stayed over at their place. Even though we didn't have to do the long Abu Dhabi-Dubai 7evens drive in the morning, we all still felt a bit tired going out to the grounds...
Linnea found a good spot to "support" from: 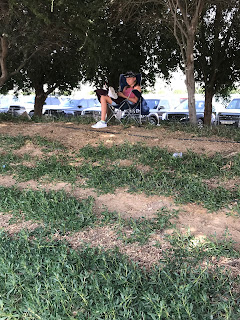 As per usual it was a rather long day, as there are long breaks in between games. Lucas and his mates played three games in the pool play, won 2 and lost 1. Then we had to wait a few hours for the semi-final, which they unfortunately lost, before we could go home. 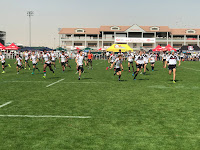 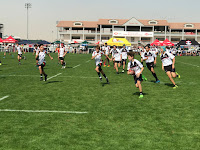 Boys played well though, but above all they seemed to have fun. I do enjoy their banter in between games, they are a great bunch of kids. 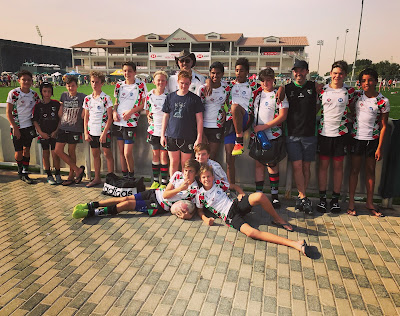