In the garden at Trapholt they showcased the Arne Jacobsen summer house. Arne Jacobsen is probably more known for his chair designs, and other interior items; but he actually also designed this so-called system house known as Kubeflex. The idea being you can add modules or change the layout to meet different needs.
Each cube-shaped element measures 10 m2, and that size was determined by what could be transported by a lorry. The intention being making this a simple system, accessible for all. 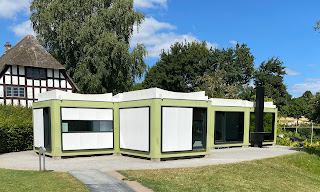 The Kubeflex house was designed shortly before Jacobsen passed away but never ended up in production. This is the only one of its kind, the prototype, having been used by Jacobsen's family as a summerhouse until 2005. That's when it arrived at Trapholt and is now preserved and accessible to the public where it stands today exactly as Arne Jacobsen envisioned it. 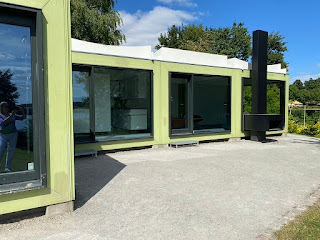 We followed along on the guided tour inside. The interior is incorporating many of Jacobsen's other designs, and it's furnished with his furniture and other items including the Cylinda-line and the VOLA fittings for the bathrooms and the kitchen.
Being a perfectionist, Arne Jacobsen designed everything in this house, from the door handles to the lights and the sinks. 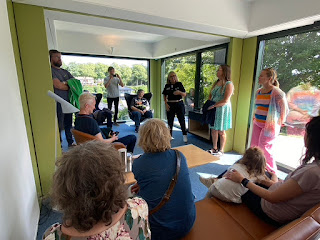 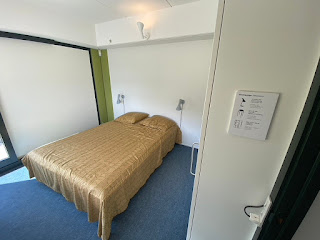 Glass being one of the prominent materials that Jacobsen worked with, the house has large windows and sliding glass doors. This was to flood the house with daylight, and create a link between the exterior, the natural environment and the interior of the house. Just look at this view behind us, and the fabulous Arne Jacobsen Egg chairs (called the most beautiful chairs in the world!). 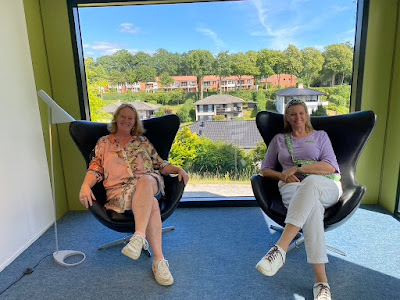