Normally I plan my summer movements already in March-April. I am a planner, and I like to have things to look forward to. This year was very different for many reasons, both that the company didn't release the summer leave until very (very!) late, but also as we didn't know where Lucas was going to end up.
Once we knew that and when we were going to NZ, I tried to find some tickets to Scandinavia for after that trip; but there was absolutely nothing that I was able to book. So even while in NZ, I had no idea of how the rest of the summer was going to look.

Coming back, I started scouring our staff travel site daily to try and find some way, ANY way, to get to Scandinavia. I don't know why this summer there wasn't many tickets released for staff, or many tickets at all, but there was absolutely nothing! Having to transit didn't make it easy to chance on stand by tickets, especially not when the travel situation around Europe seemed chaotic like never before. But also because I am not very good dealing with uncertainty, now even less than before Covid.

In the end, during my daily sessions of intense googling, I finally found two seats that I could actually book - to Amsterdam. Ok then, Amsterdam it was!
This time more than ever, it felt real appropriate with a glass of bubbly on boarding, on our way! 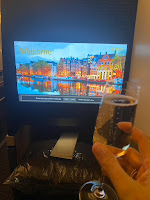 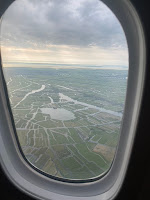 Almost felt like a bonus that both our bags made it this time! 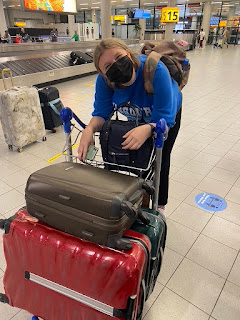 I then had had to find a way to get us to Scandinavia from Holland, and let's just say I looked at all options, flights, trains, renting a car... Finally, we ended up continuing on by BUS! We waited five hours in the airport, and then we took a Flixbus across the Netherlands into Germany, to finally reach Hamburg about 6-7 hours later. 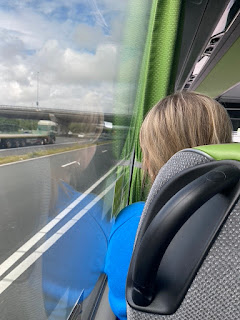 It was actually quite nice getting the chance to enjoy the scenery (and the greenery) like this, across Europe. The bus was comfortable enough, and had wifi, so time passed no problem. 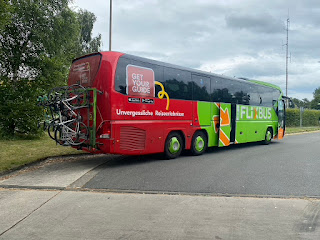 Arriving in Hamburg late at night, I had booked us a hotel just across from the bus station as our next bus was departing the next afternoon. It turned out that wasn't the very best part of Hamburg, and as we went to try and find some dinner, we ended up on some rather sketchy streets. We turned around, entered the first Bierstube that looked alright, and had some pork knuckle before tucking in for the night, ending the first part of our long trek. 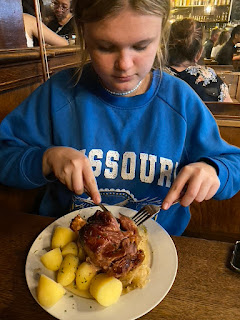