I had this picture of an amazing Pav Christmas Tree swirl by when I was scrolling Facebook the other day. A recipe by food blogger RecipeTin Eats which appeared in Good Food Australia earlier this month. 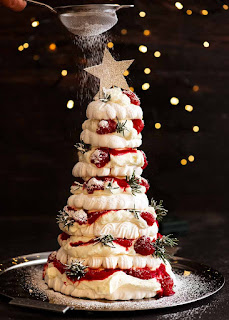 Yesterday afternoon I thought I'd try it out on the family, and set out baking the pavlova rounds in the afternoon to be able to serve it for dessert after dinner. I do pride myself on making a pretty good Pav, so the meringue mixture itself wasn't too daunting. Piping out the Pavlova rounds though... that's another story. Let's just say I've never got the hang of how to use a piping bag, the kitchen - and I - looked a mess! But, in the oven they all went finally!

Unfortunately, I forgot to check them and just assumed they were baked when time was up and I left them to cool. I think this is where I went wrong. Once I started the constructing of the tree I realised that they were still soft and gooey on the bottom, which didn't work too well in hoping for the tree to stand straight and sturdy.
So my end result was this! 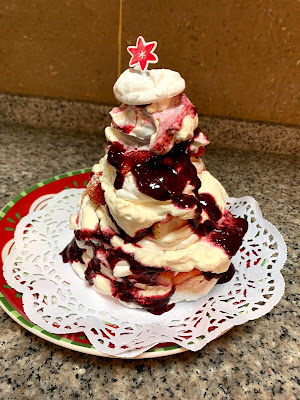 You are allowed to laugh! I got a pityful "-Oh Mummy..." from Linnea when I showed her how it was supposed to look like. Ha ha, well, yeah, mine was quite far from the original! And also, it toppled over right after the photo was taken, so I ended up presenting more of an Eton Mess kind of dessert instead. Didn't matter, it still tasted just as amazing - chunky layers of Pavlova, strawberries, homemade raspberry coulis and cream... mmm! It all got devoured in no time!
I'll redeem myself with a mean normal Pavlova for Christmas!