This Friday and Saturday Abu Dhabi hosted the 'Etihad Airways Abu Dhabi Harlequins Junior Rugby Festival'. This festival, celebrating its 10th year, is considered to be the largest annual junior rugby competition in the world!
This weekend they had 3,000 youngsters in a record 236 team joining the tournament. It really is a huge event.

Nathan took Lucas down this morning bright and early, they were supposed to meet at 7.30. Better prepared this time with both camping chairs, cool bag filled with food and drink and a gazebo and all!
Lucas and his U11 team played four games. 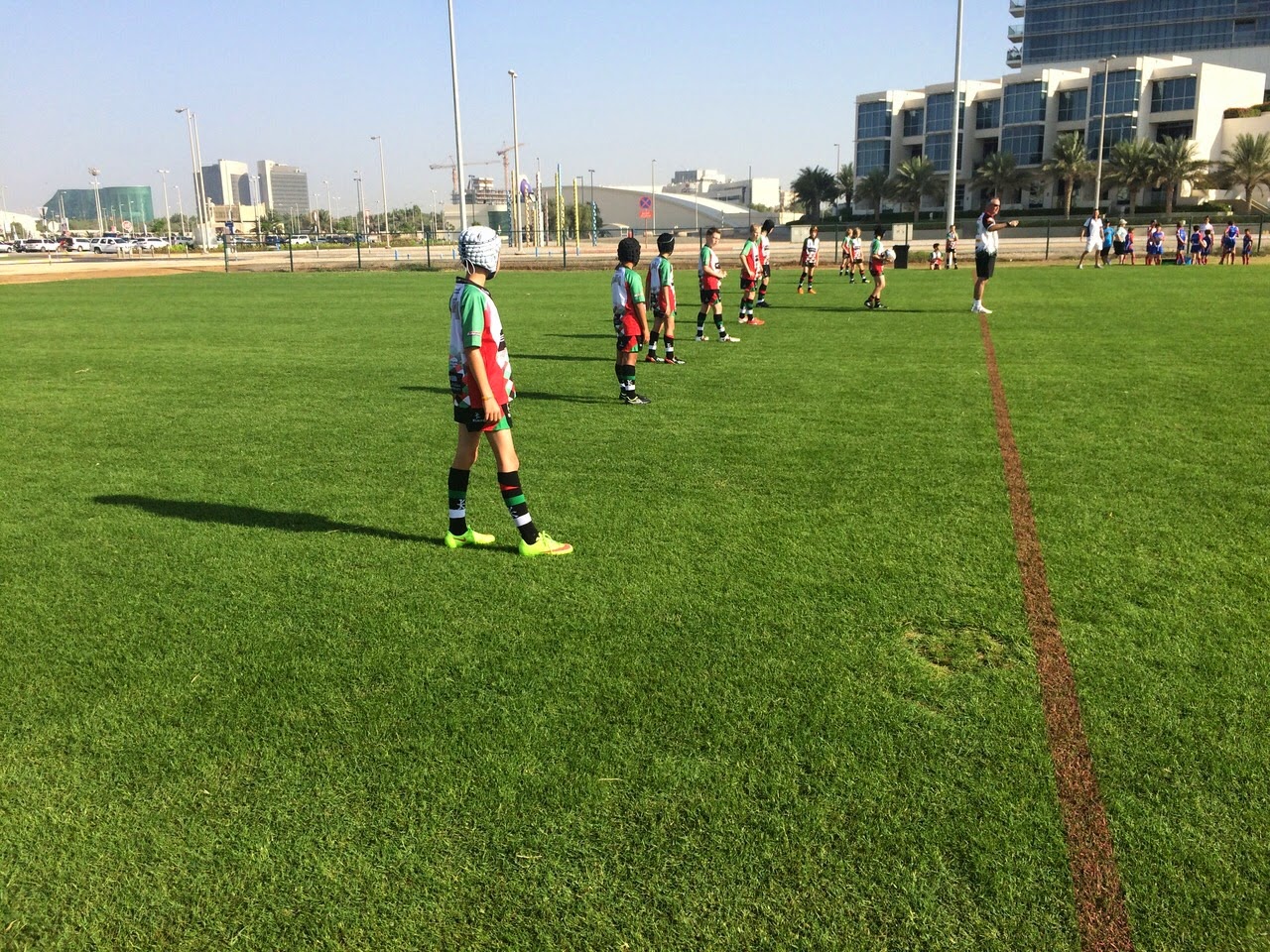 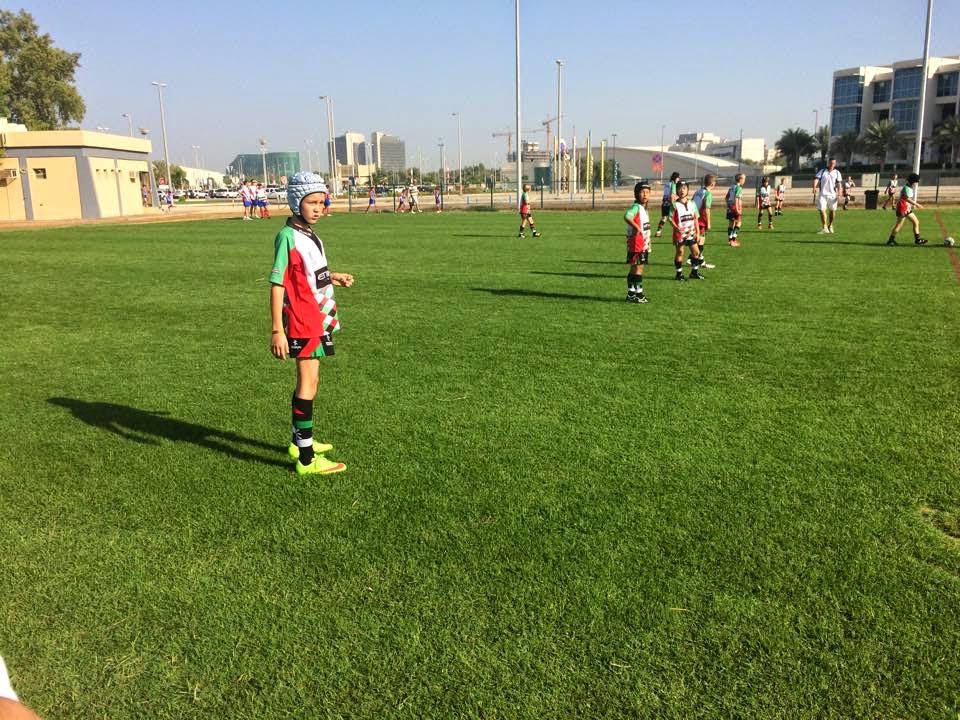 (Linnea and I were stuck at home waiting for the garden people (again ...) coming to replace the motor of our irrigation, so we missed all the fun...) Unfortunately, the day ended not so fun for Lucas as well.
He twisted his foot getting tackled and ended up on the side line with some ice on it. As the ankle didn't seem to stop swelling, the paramedics came to have a look, and recommended Nathan to take him to the hospital for x-ray to make sure nothing was broken. 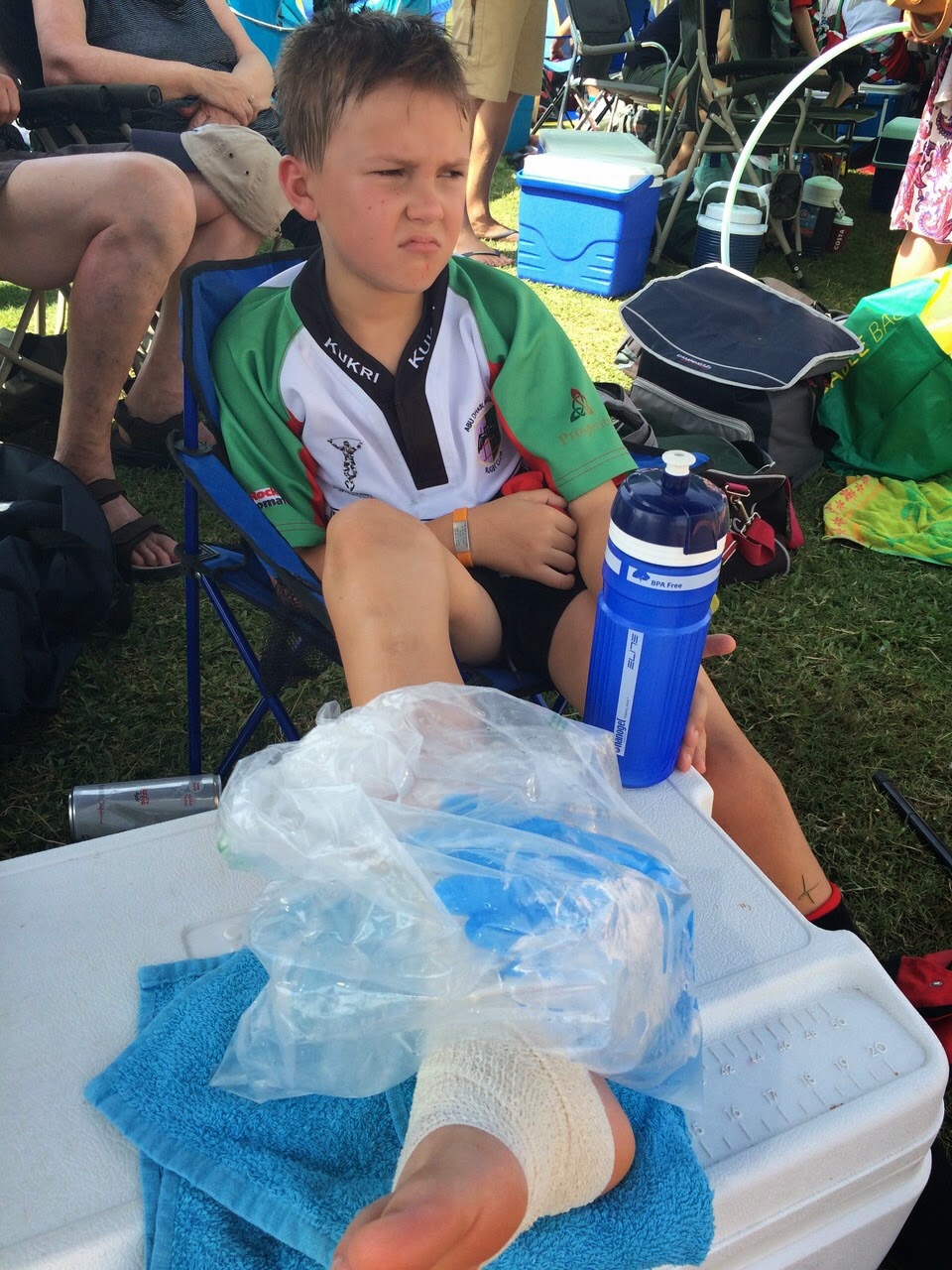 But before they left, they needed a team photo! Lucas is being held up by his friend Sam and his other team mate, as he couldn't support on his foot.
That's team spirit for you! 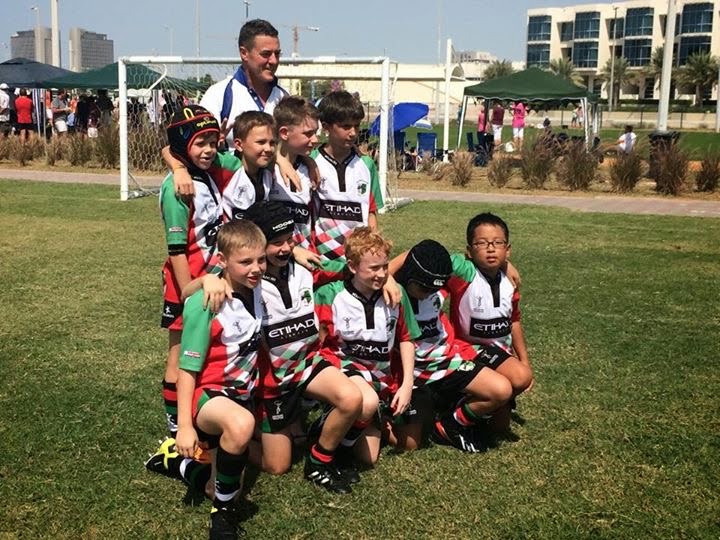 We met them at the hospital just across from the stadium. He didn't need to wait long luckily, he got seen to pretty quickly. Ha ha, he wasn't the only rugby player in there... 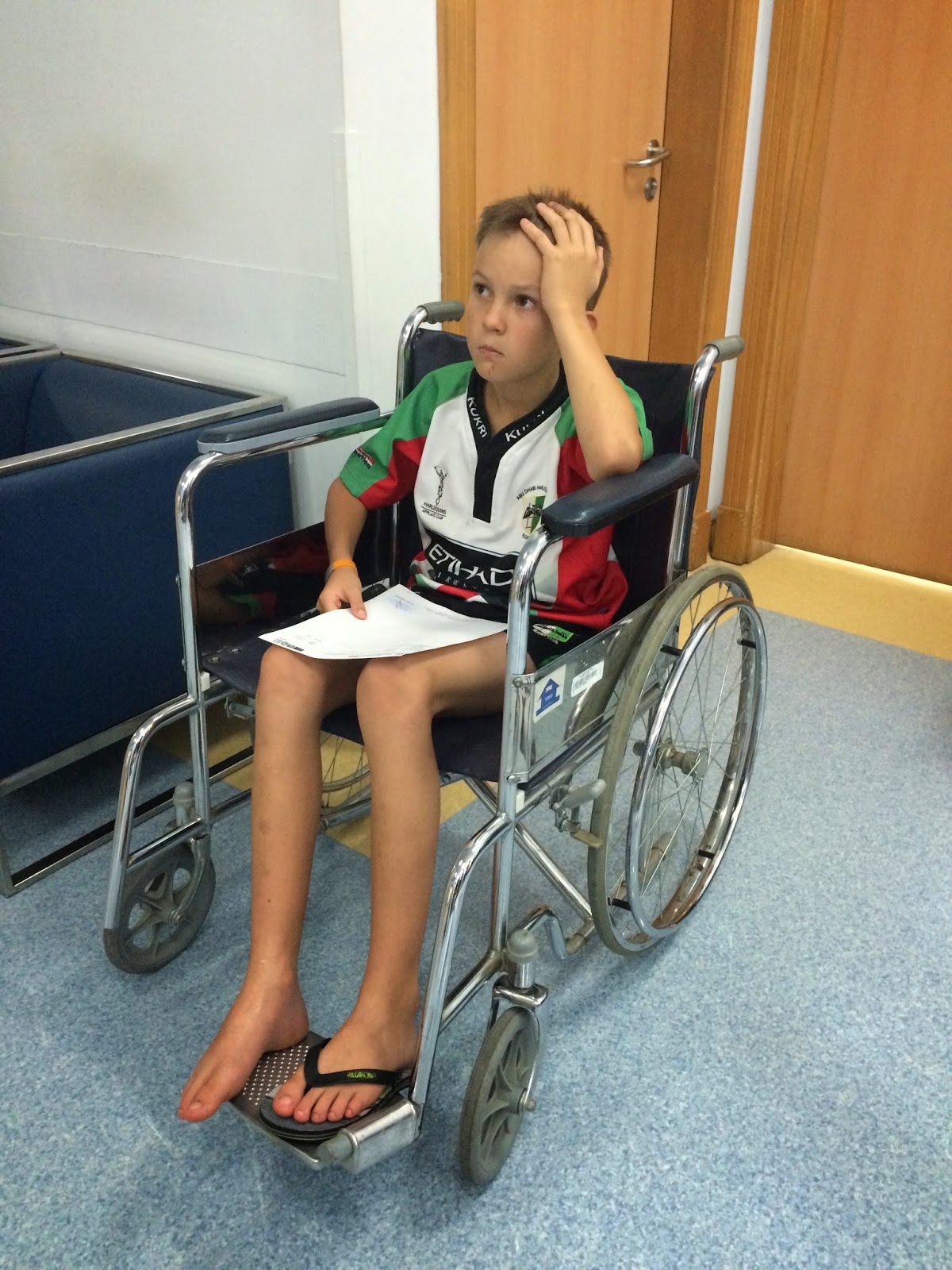 Fortunately it was just tissue damage, but they still put a back support with a preventive cast on it, as he shouldn't be moving it around too much while it heals. Nathan went and bought him some crutches, so he can hop around and Monday we have an appointment at the orthopedic department of the hospital. Hopefully they will take the cast off then - as we are off on holiday on Tuesday..! :/

Bless him, he was so brave all day, even when they didn't quite know how serious it was. He took the whole experience on like a trooper. It really looks a lot worse than it is, with that big cast on that skinny long leg, but he should be recovering fairly quickly. 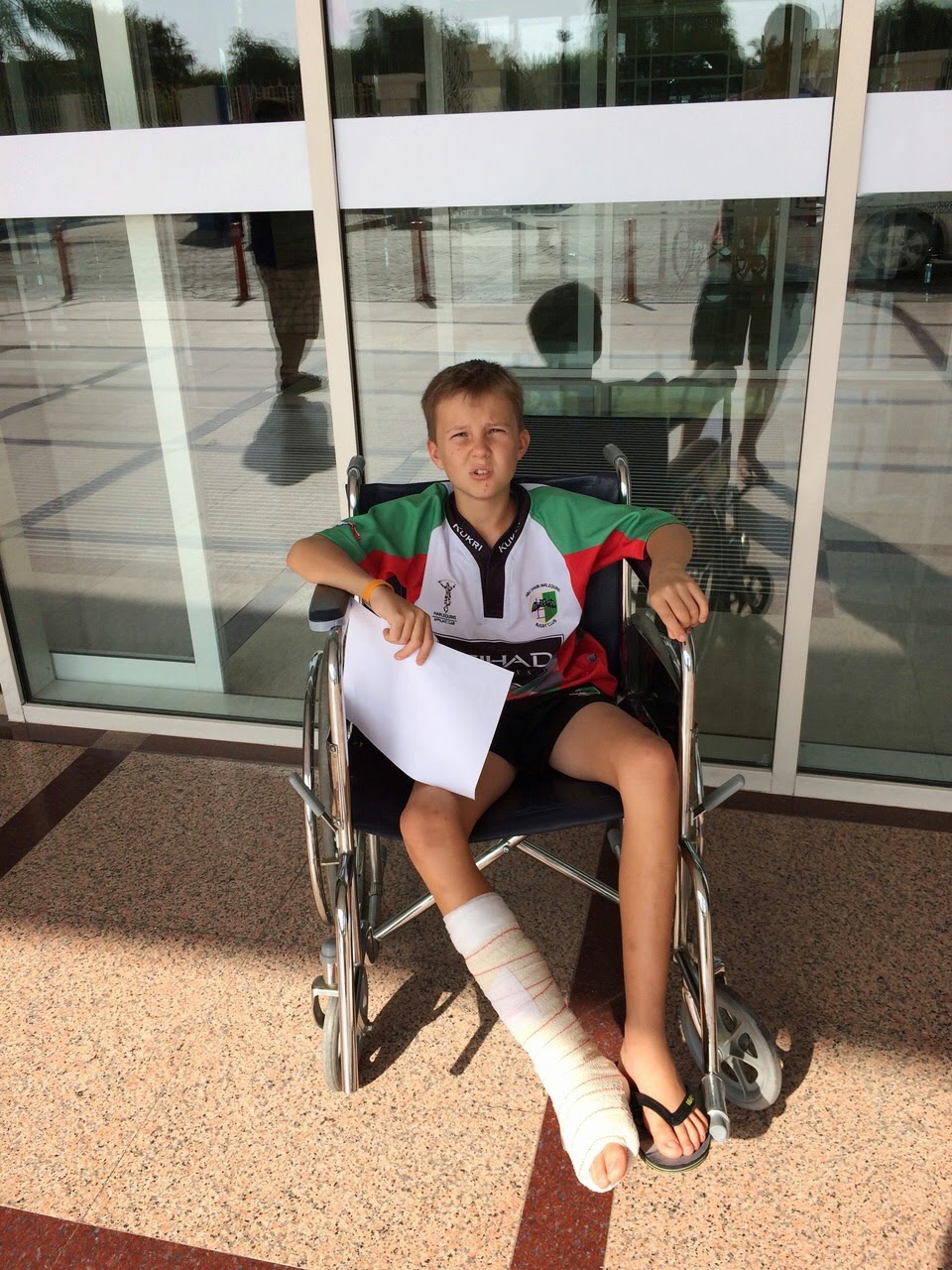