Oakley is feeling very sorry for himself this weekend. On Wednesday he went in for his neutering, which in itself is a fairly easy surgery, but now he has to wear this cone, to avoid him licking the incision site while it heals, as it could cause infection. He was not impressed at all when we brought him home on Wednesday afternoon, just sat there like this for the longest time: 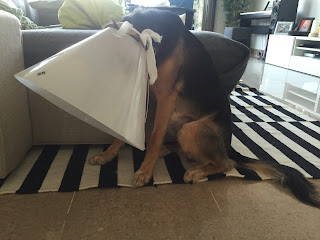 Now a couple of days into it, he's moving about more and getting around the house, only occasionally bumping into things, but at least he seems to have found a few comfortable positions that works, even with a cone! 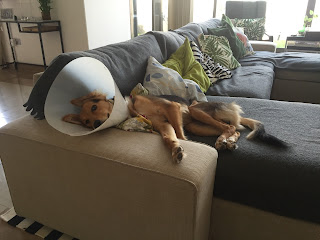 As Oakley was an Animal Action rescue puppy, we had to agree upon adopting him to have him neutered when he reached the right age. Here in the UAE it's a way of controlling the pet homelessness crisis. There are so many abandoned dogs here, that ultimately risks getting euthanized even though they are healthy, because there simply aren't enough homes to go around. 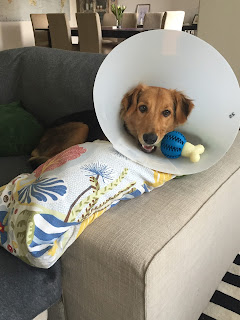 We are going back for a post-op check-up on Sunday, and so far it's healing well, so I hope he can get rid off the cone by then, so he can get back to his normal self.
Posted by MrsW at 13:03

Email ThisBlogThis!Share to TwitterShare to FacebookShare to Pinterest
Labels: Oakley