Friday evening Lucas asked if he could bring his laptop to our friends, as he plays the same games as his mate there - and Linnea then just followed suit and brought hers too, plus her iPad...(Picking our fights, it just wasn't the time to argue, but they had to carry it all by themselves.)
As it turns out, the boys ended up just playing outside, but Linnea and Tilde actually got on her computer for a bit, as they didn't want to go outside in the dark.

When it was time to go home, we flagged down two taxis on the street and squeezed us all in to go home. As soon as we came home I took Oakley out for a quick walk, and when he and I returned all hell had broken loose in our house... - Linnea had left the bag with the laptop and her iPad behind in the taxi..!!
Argh!!!

While Nathan was busy still scolding Linnea, I immediately called the TransAD call center and their Lost & Found to start a search.
Normally when you order a taxi, you get a text with the name, number of the taxi and phone number of the driver; but since we had flagged the taxis on the street, we had no information. I had to leave the times we were picked up and dropped off, the locations, how much we had paid, how many passengers we had been etc etc.
Then, all we could do was to wait.

Leaving something behind like that normally means you will never see it again. Although living in the UAE, I had hope. Stealing is punished very hard here, and is considered a severe crime. I had blocked the iPad via the 'Find my iPhone'-app, and according to that no one had tried to use it. I kept believing the bag would turn up, eventually.

And would you believe it - yesterday the taxi company called and told us that the bag had been handed in by the taxi driver (hourray for honest people!), and we could come and pick it up at their main office!
I took Linnea and Tilde with me, and we went to deepest, darkest Mussaffah to recuperate the bag - happy days! Lucky lucky lah lah! 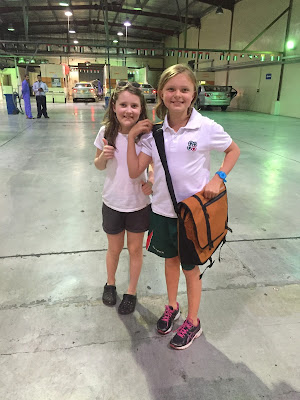