I might have to have a little chat to my telltale son about exaggerating. No wonder Nathan thought the worst reading these messages the other week: 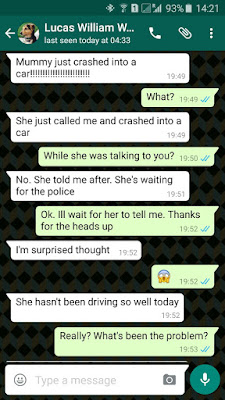 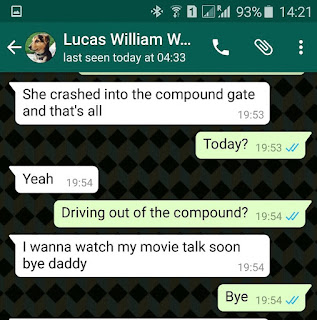 So, just to set the record straight:
* I hadn't CRASHED the car. I had (yes, unfortunately and it was entirely my bad) scraped another car in the car park at rugby.
* I wasn't waiting for the POLICE, but Saaed. The other lady and I were both quite unsure about what to do, as it was a really small mark, but we thought we would do the right thing and call Saaed. They deal with traffic accidents here. (You need them to come and decide which part is faulty, to be able to have any damages fixed at the repair shops. They won't touch your car without a report from Saaed.)
* I was going to tell Nathan myself (who was in NZ at the time), of course. But first I had to call home and tell Lucas as he was home alone with Oakley, since Linnea and I were going to be a little bit later than I initially had told him because of this. I was going to text Nathan afterwards - but someone else got there first... :)
* I didn't CRASH into the compound gate either. I had merely nudged it earlier that day, when it didn't open on approach as it's supposed to do.