As you might remember we had our garden done up (=installed) two years ago. It sure wasn't cheap, but it turned out really lovely once it was done, and I so enjoyed opening my curtains to something greeeeeen every morning, instead of just sand, sand, sand...

Unfortunately though, our garden wasn't as low maintenance as we had asked for. Well to be honest, it ended up completely dying on us!
It wasn't all because of lack of love... mostly it was because the irrigation system packed up over and over. Once we didn't notice until it was almost too late, but managed to salvage most of the bushes; but then it happened again while we were away - which then completely killed off all the flowers, the grass and whatever greenery that was left. Boo. 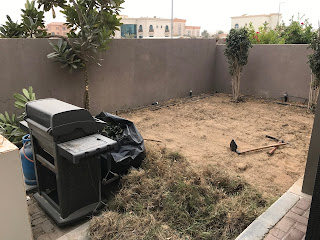 So for the longest time we have talked about having all the dead stuff ripped out and replace it with AstroTurf, but we haven't got around to it - until last week.
Now I wish we would've done it sooner!
It only took the garden people half a day to remove the dead grass, level it all out and install beautiful lush artificial grass. They also trimmed the bushes and the tree that is still standing and filled all of our flower beds with bark. It's back to looking nice and tidy! 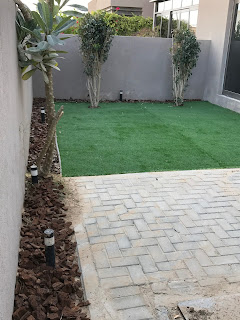 I don't care that the grass is fake, at least it is greeeeeeen and I enjoy opening my curtains again! Apparently it still needs some maintenance in the form of vacuuming (yes, really!), as a lot of sand gets trapped in it. Lucky we have an industrial Kärcher vacuum, the good stuff! I'll be sure to photograph the first time it happens, ha ha!

We even got a little patch of left over grass placed at the front door! No red carpets here, they are all green, green, green! 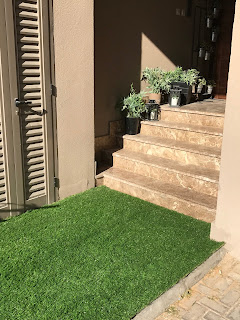