A true manifestation of Art and Culture

Yesterday I was invited through the TCA to a special lecture held at the Sheikh Zayed Grand Mosque, about the floral inlays on the 1096 external columns adorning the mosque. 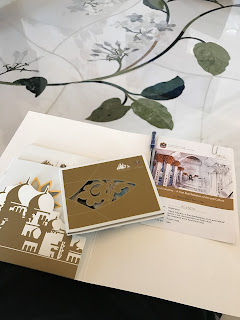 The lecturer was Dr Mitchell Abdul Karim Crites, an American art historian that has lived and worked in India and across the Islamic world for more than forty years. He is the founder of the world of Saray design that supports artisans from around the world to create architectural and artistic commissions rooted in the traditions of the Islamic world.
He started out by talking a little bit of what inspires him, his background and so on; and continued to talk about the fundamental aspects of the Islamic art. All very interesting, even more so as we were sitting in the South foyer of the Mosque able to admire so many of the decorations around us as we listened. 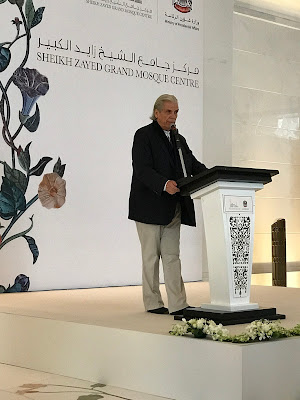 Currently, he is involved with the extension of the Masjid Al-Haram in Mecca Sharif, which is scheduled for completion later this year. More than 700 master inlay artisans are working on the inlaid calligraphy panels there under his supervision. 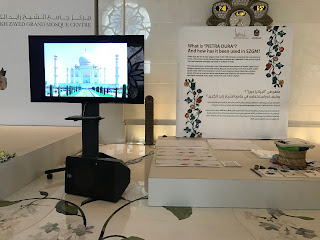 Obviously most of his stories were from the creation of the flower features on the external floral columns of the Sheikh Zayed Grand Mosque. He mentioned that when he first got commissioned the job, he got told that the vision of Sheikh Zayed was to make this mosque just as iconic and beautiful as the Taj Mahal. The brief was to incorporate both traditional, modern and Emirati styles, and one must say that the mosque is really a successful merge of all this!
They found inspiration for the columns from the earliest roots of Islam - nature. The flowers pictured were not to be natural flowers, but rather "flowers from paradise". 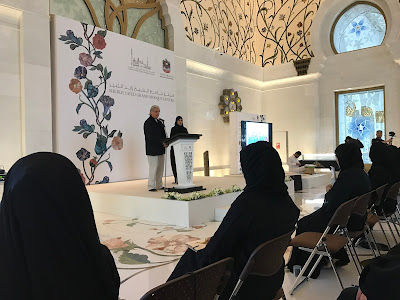 17 different semi-precious stones were used for the inlays in these floral columns, including lapis lazuli, onyx, agate, iridescent abalone, mother-of-pearl, amethyst and more. 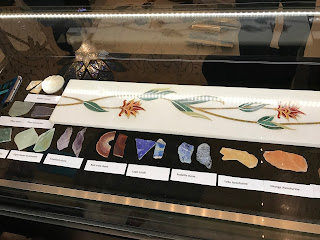 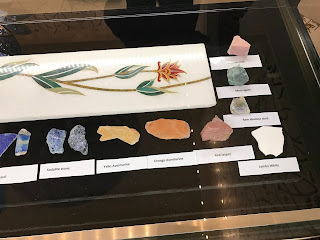 It was really interesting, both the lecture itself, but also the live demonstration on "Pietra Dura" that was performed after the lecture. All the pieces for the flowers in the inlays of the columns were cut and ground into shape in India and then shipped to Abu Dhabi. 250 people were employed to work on the cutting and polishing of the 5 million pieces needed, and later on 50-60 artisans worked for two years at the mosque, doing the inlays. The outer patterns would be done by machine drill, but all the inline patterns were cut by hand, by chisel. 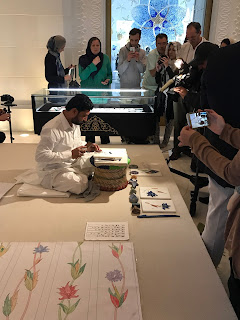 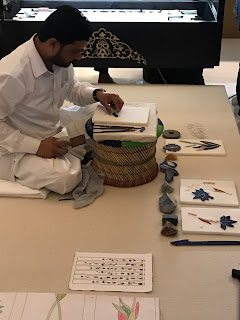 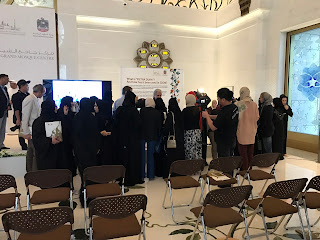 Liina, a girl from my Tourist License course was also there to listen, nice to catch up! 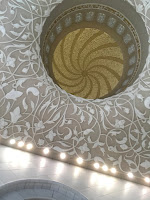 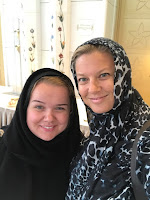 After the lecture they offered us a chance to talk and network with the other participants. I met a Lithuanian artist who specializes in Islamic art as well, and who visited the mosque for the first time. 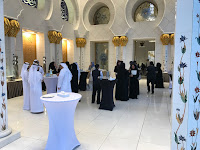 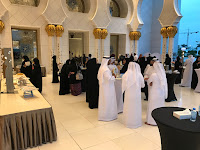 I couldn't help but going for a quick stroll after the lecture to grab a few photos of the mosque in it's special blue evening light. It is rather spectacular like this at night. It was the first time for me actually visiting it in the evening, so beautiful. I never get tired of this place. 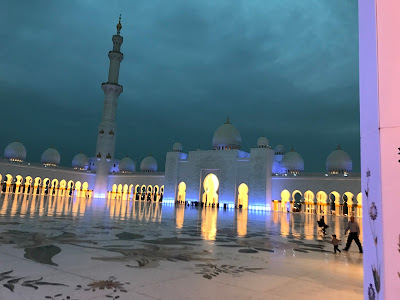 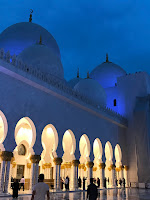 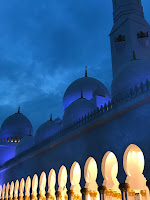