We had an appointment today at the Apple Shop at Yas Mall to sort out Lucas' broken phone. Lucas brought a friend who had been for sleepover and Linnea had asked her BFF Grace to come along so she met us there too.
We split up for a while and everybody had lunch in different places, then we had a few jobs to do. Lucas and his friend were let loose to cruise for a bit on their own, and so were Linnea and Grace for the first time.

This was something Linnea had been looking forward to doing ever since she got her phone (and hence could be in touch) a while back, and Grace and her really made the most of it. 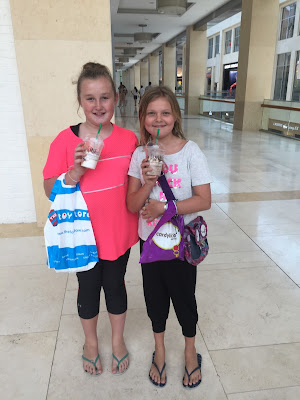 When we met up again after a short while, they had been to all their favourite shops and spent the whole allowance, ha ha. Linnea proudly showed off her bags from Bath & Bodyworks, Claires and Candylicious, but mostly she was super excited they had been to - Starbucks. :)
Big girls now!
Posted by MrsW at 22:27