One for the books

Our New Years Eve didn't quite go as planned... although it started out very nicely, with everybody looking gorgeous and the table being set beautifully: 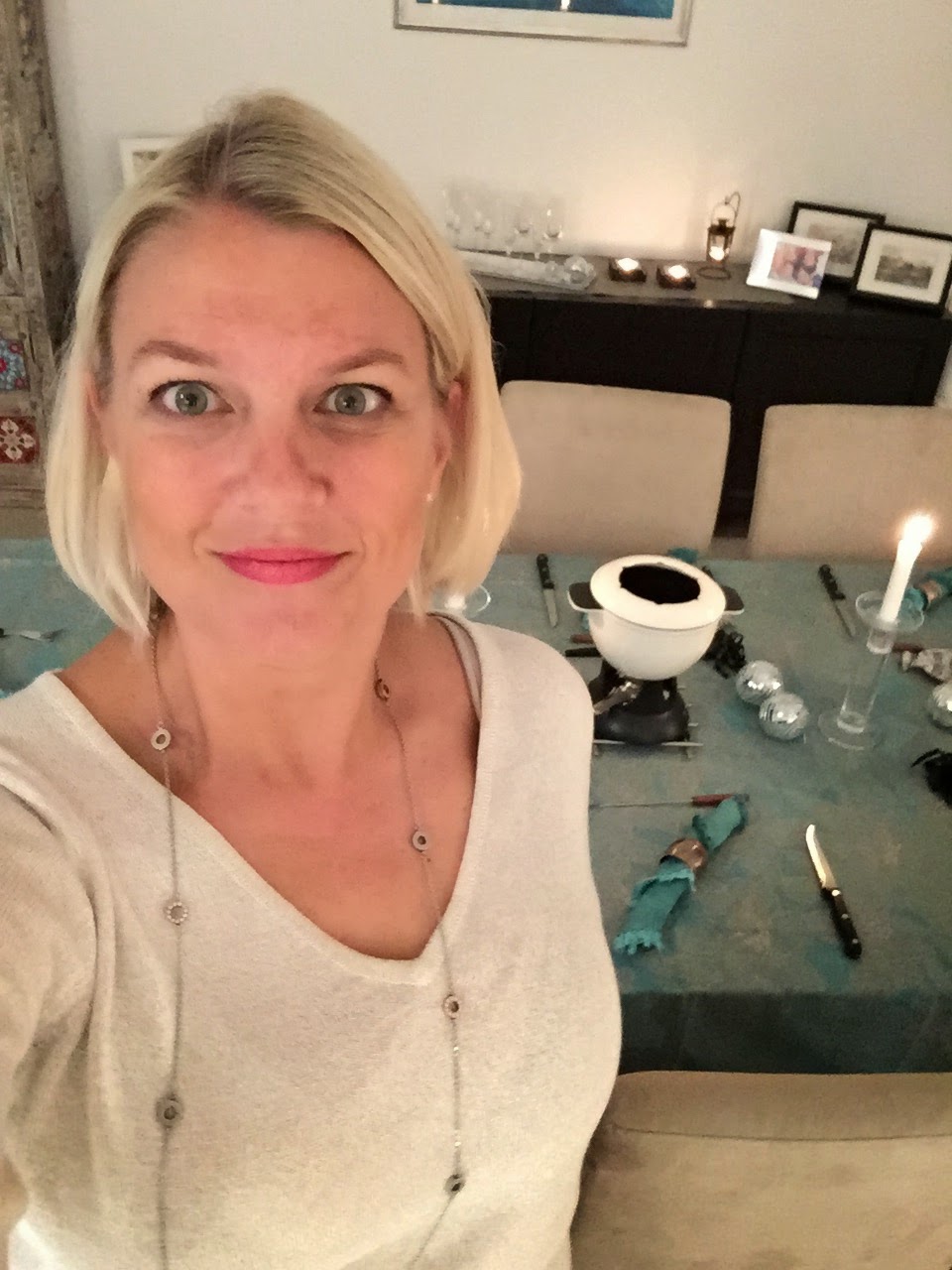 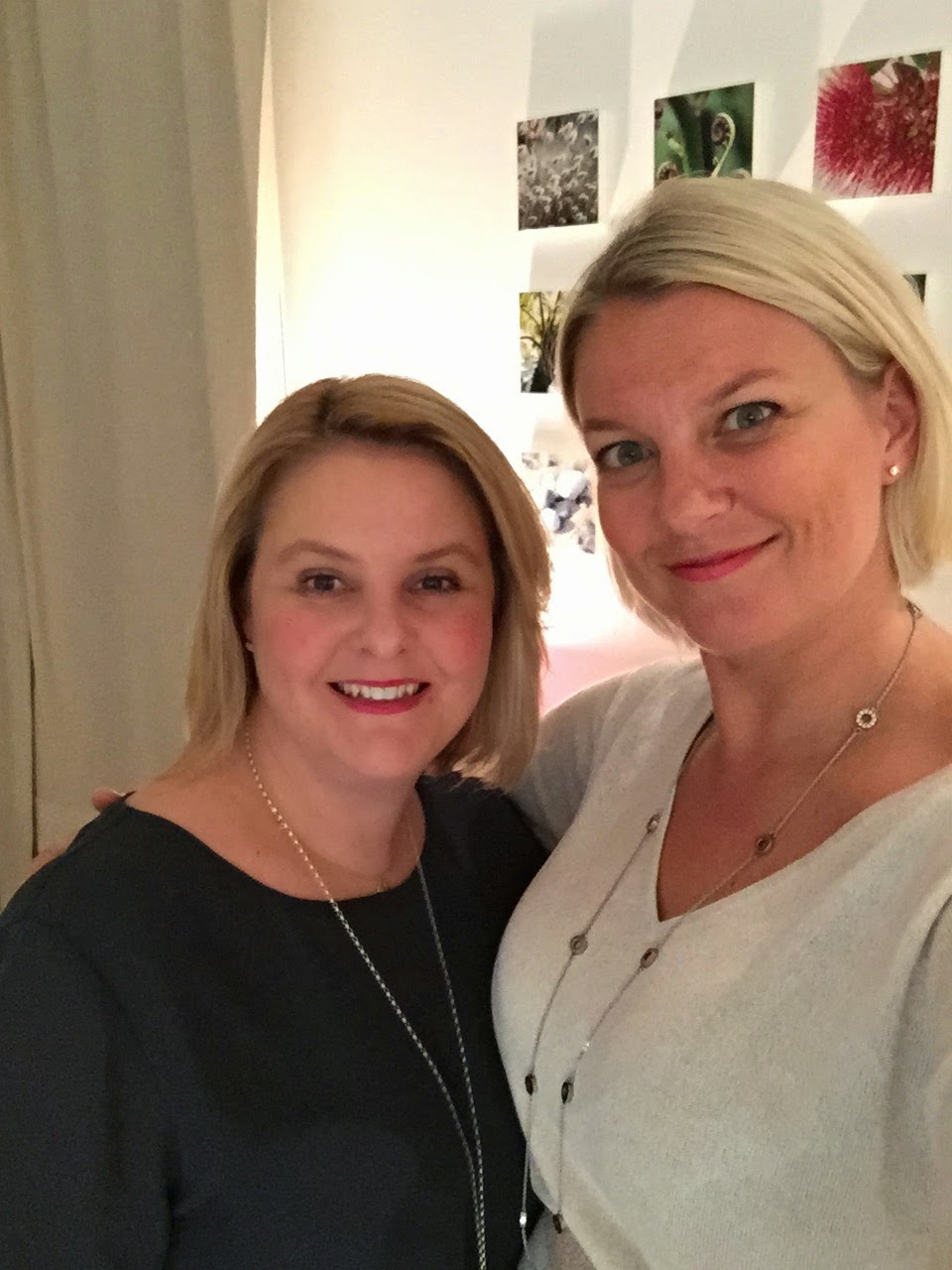 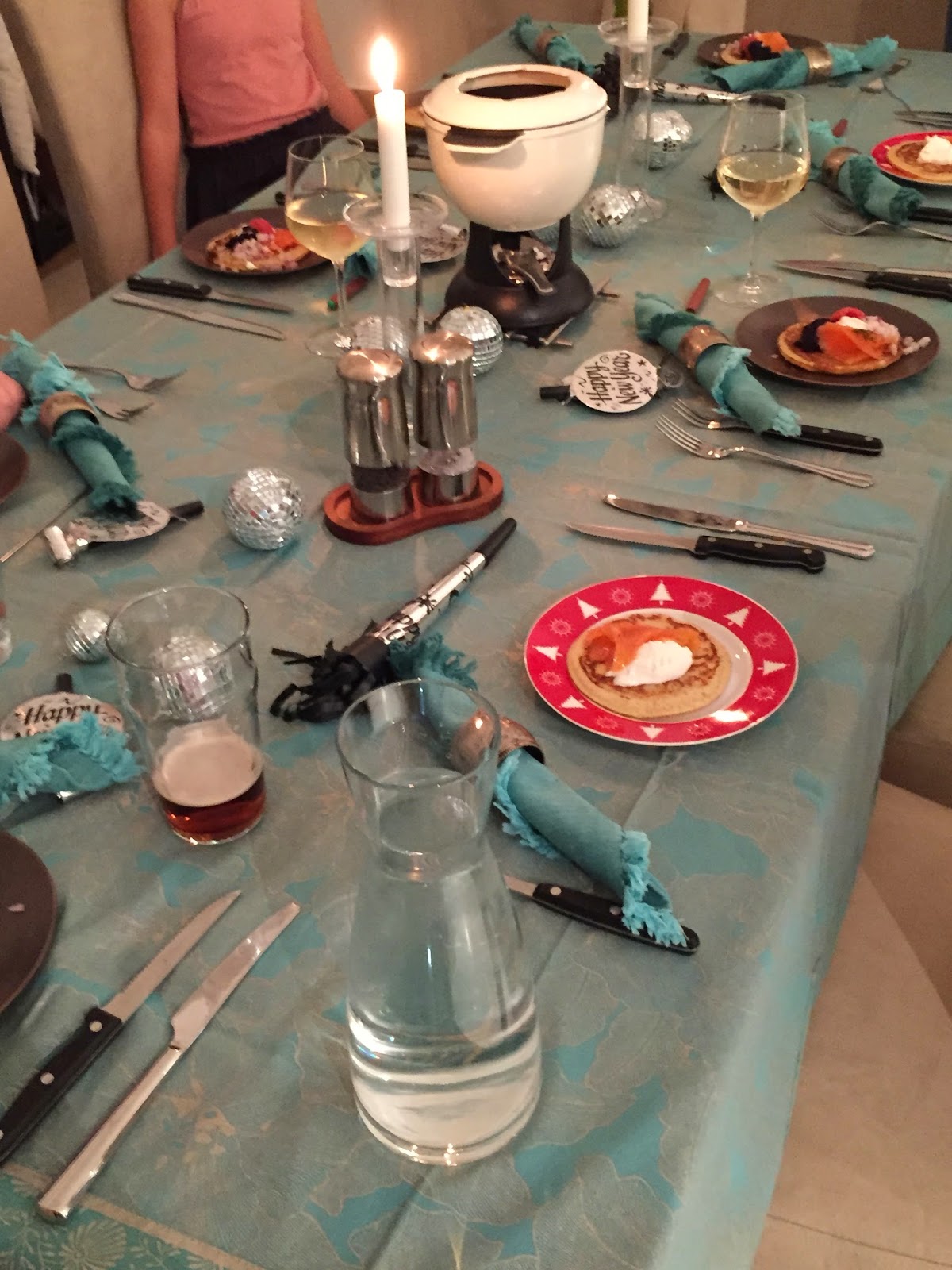 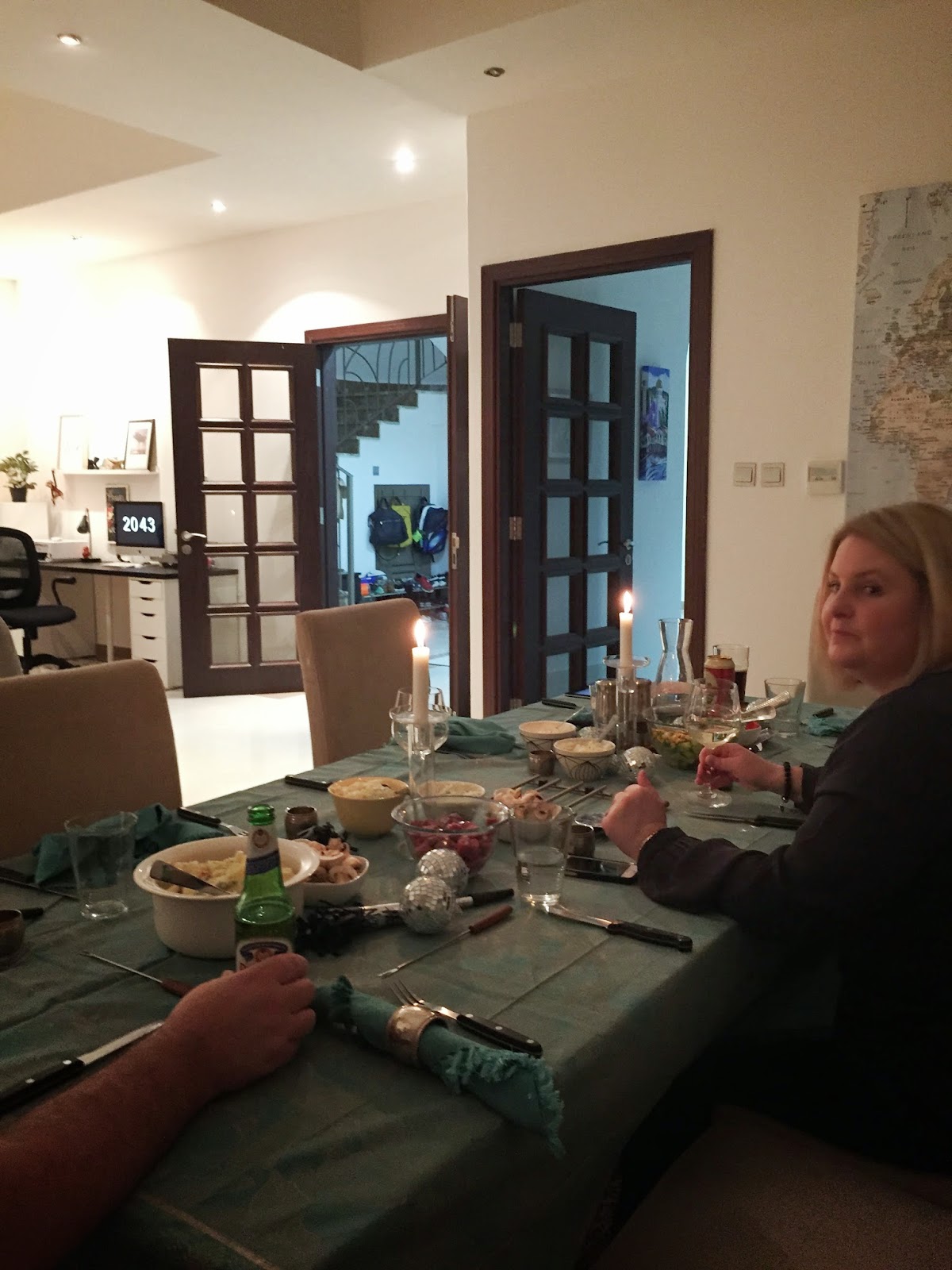 We did a repeat of the successful menu of last year, with blinis served up with salmon, crème fraîche, red onion and caviar for entree: 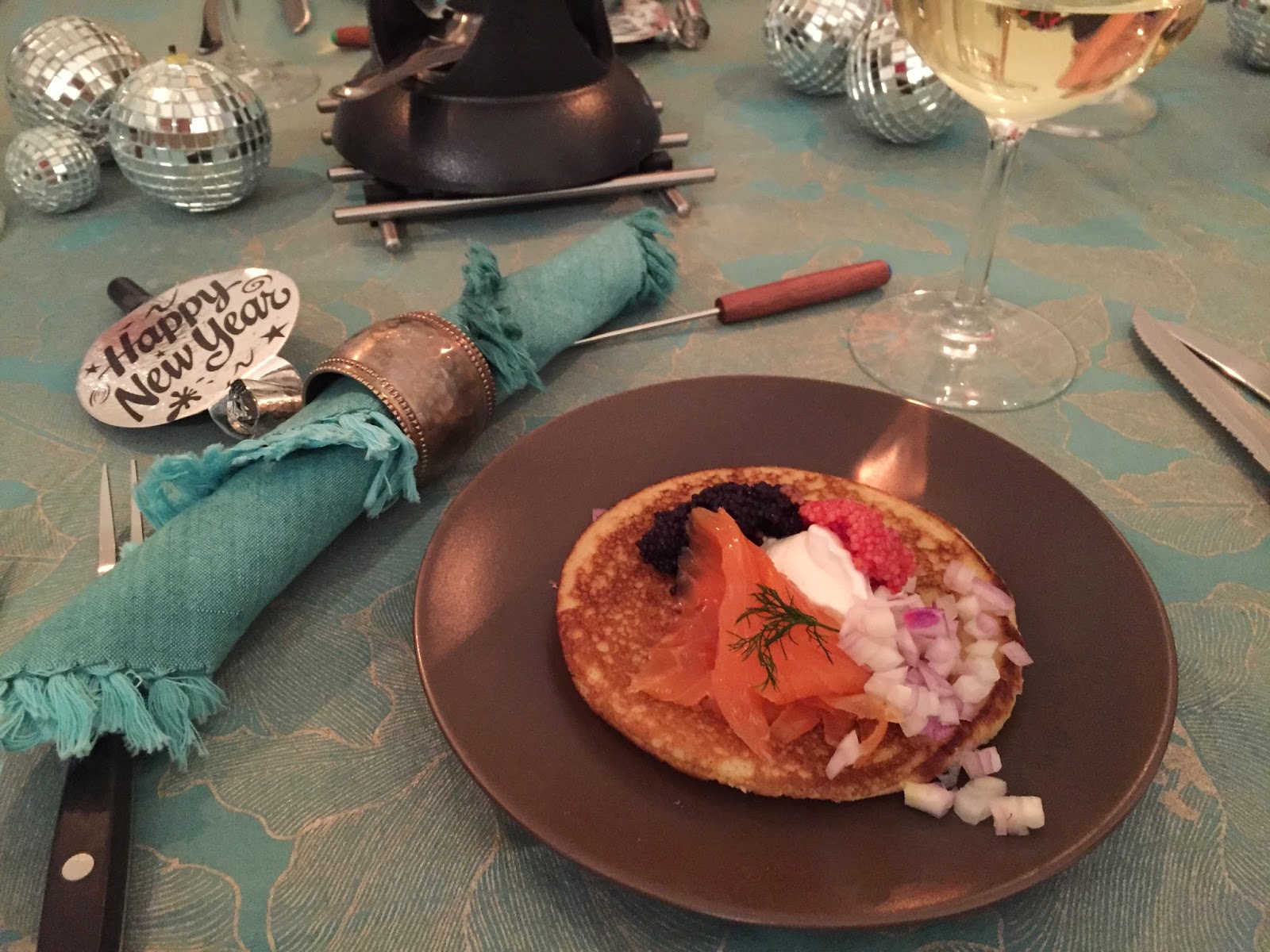 For main course we fired up our new fondue pot. Although we did anticipate we might have trouble with the cooking, as I couldn't find the proper fondue fuel for it. I must research a bit better next year, as this year we tried to make do with torch fuel. 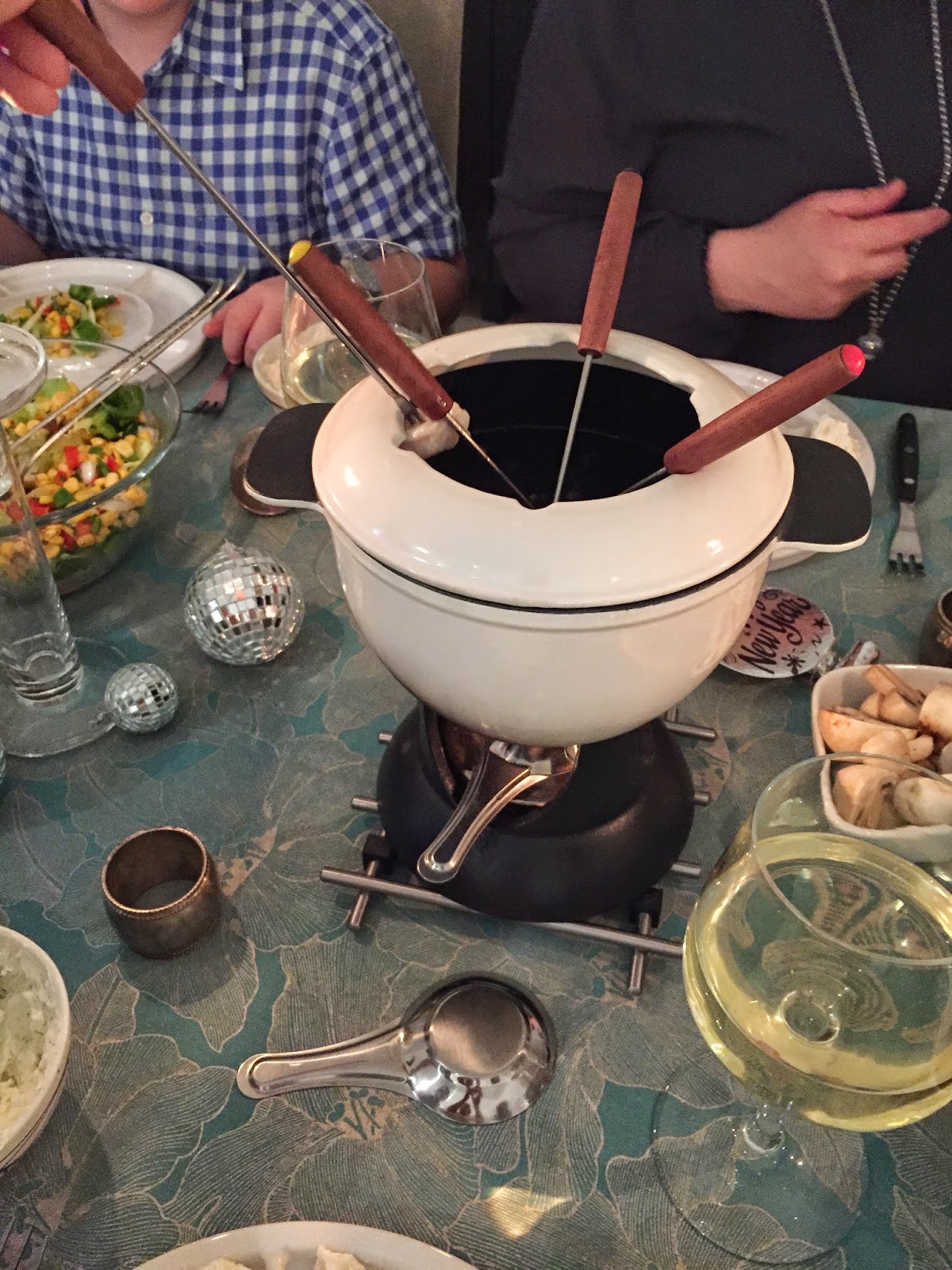 It was the first time the Whites had fondue, and it proved quite a success! It's nice that it takes some time to cook the food, so you actually get to sit and enjoy each others company for quite a while - and since I couldn't find the spare fondue forks, we had to share them to make sure everybody got fed. 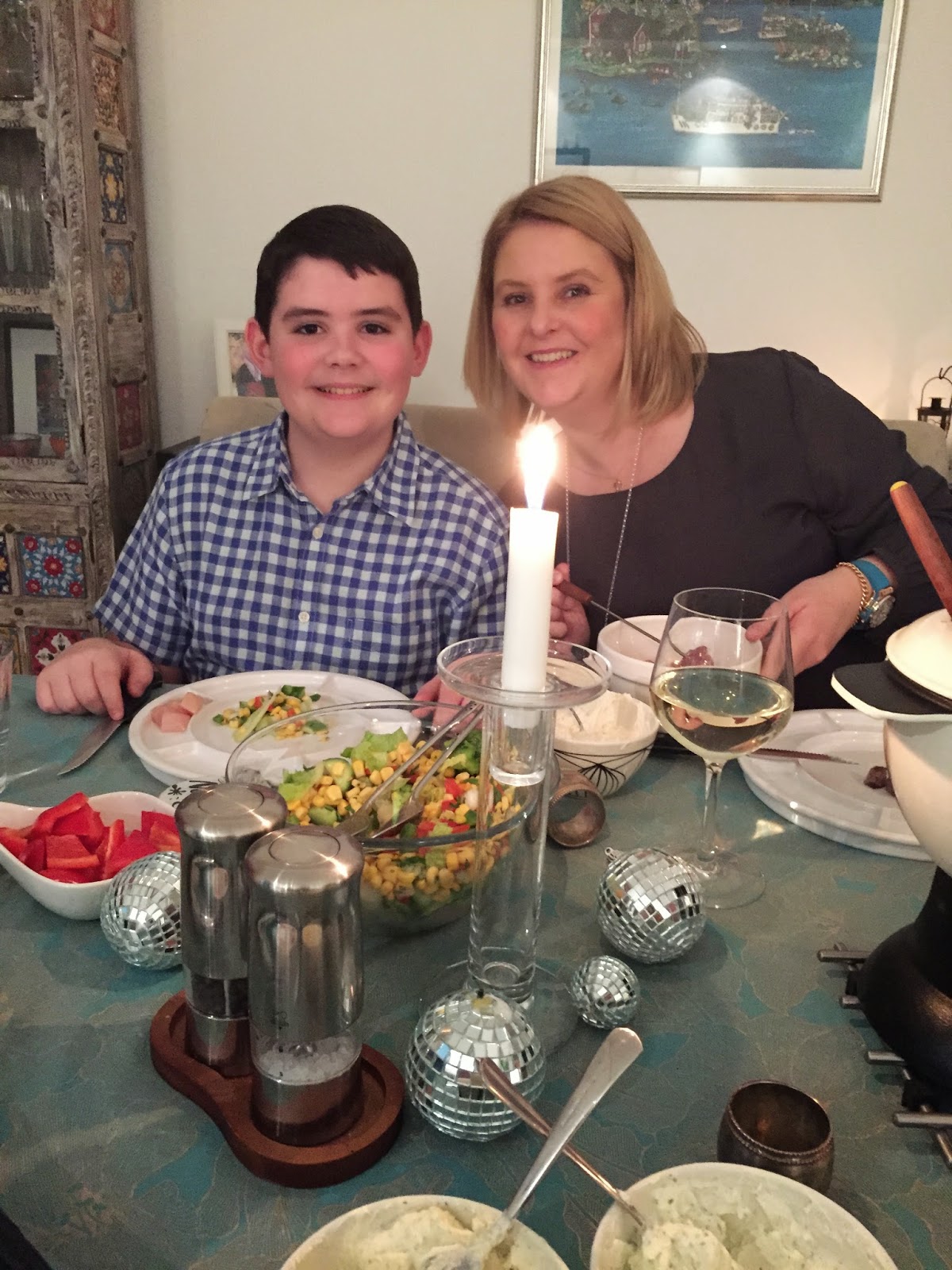 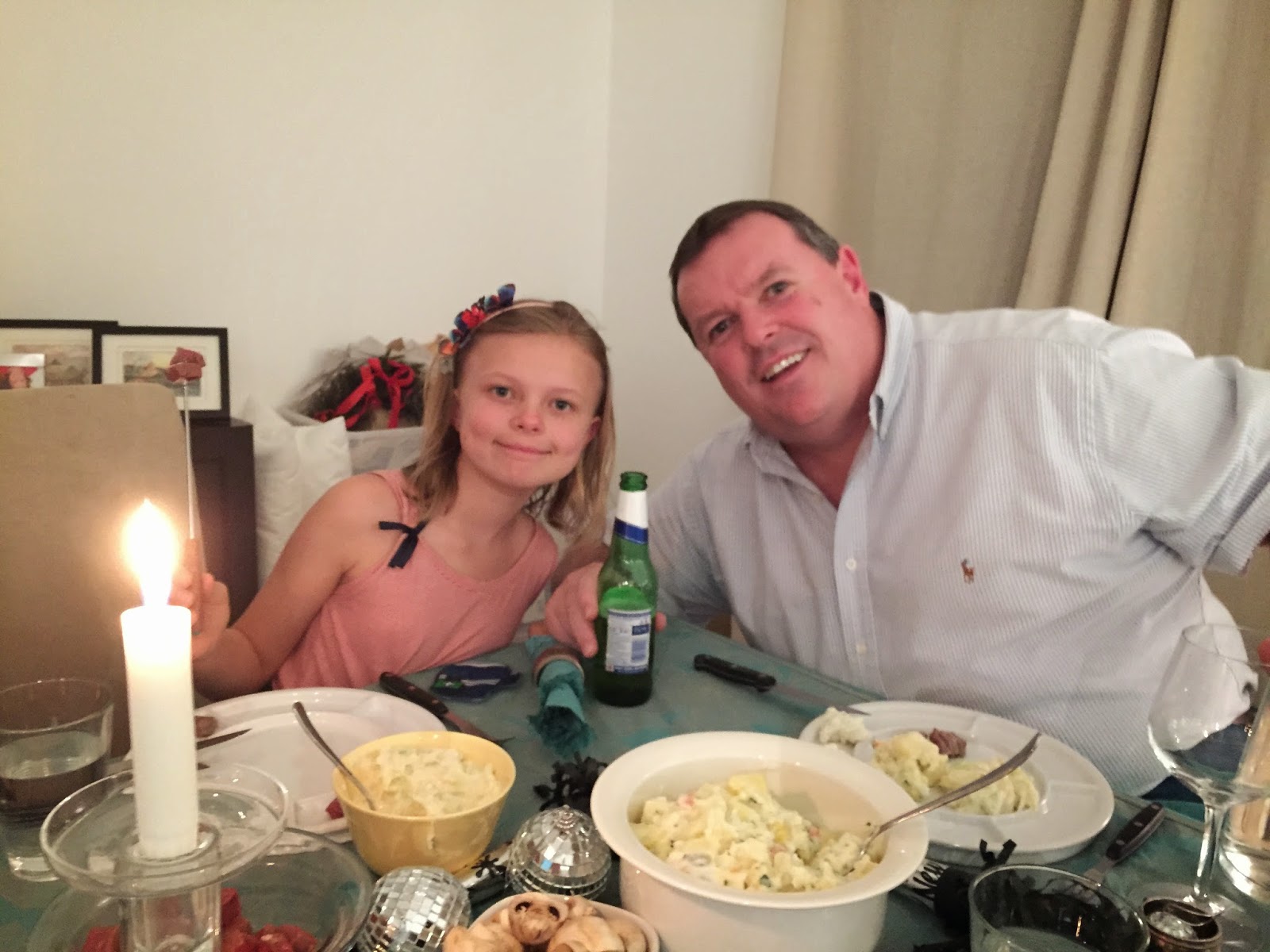 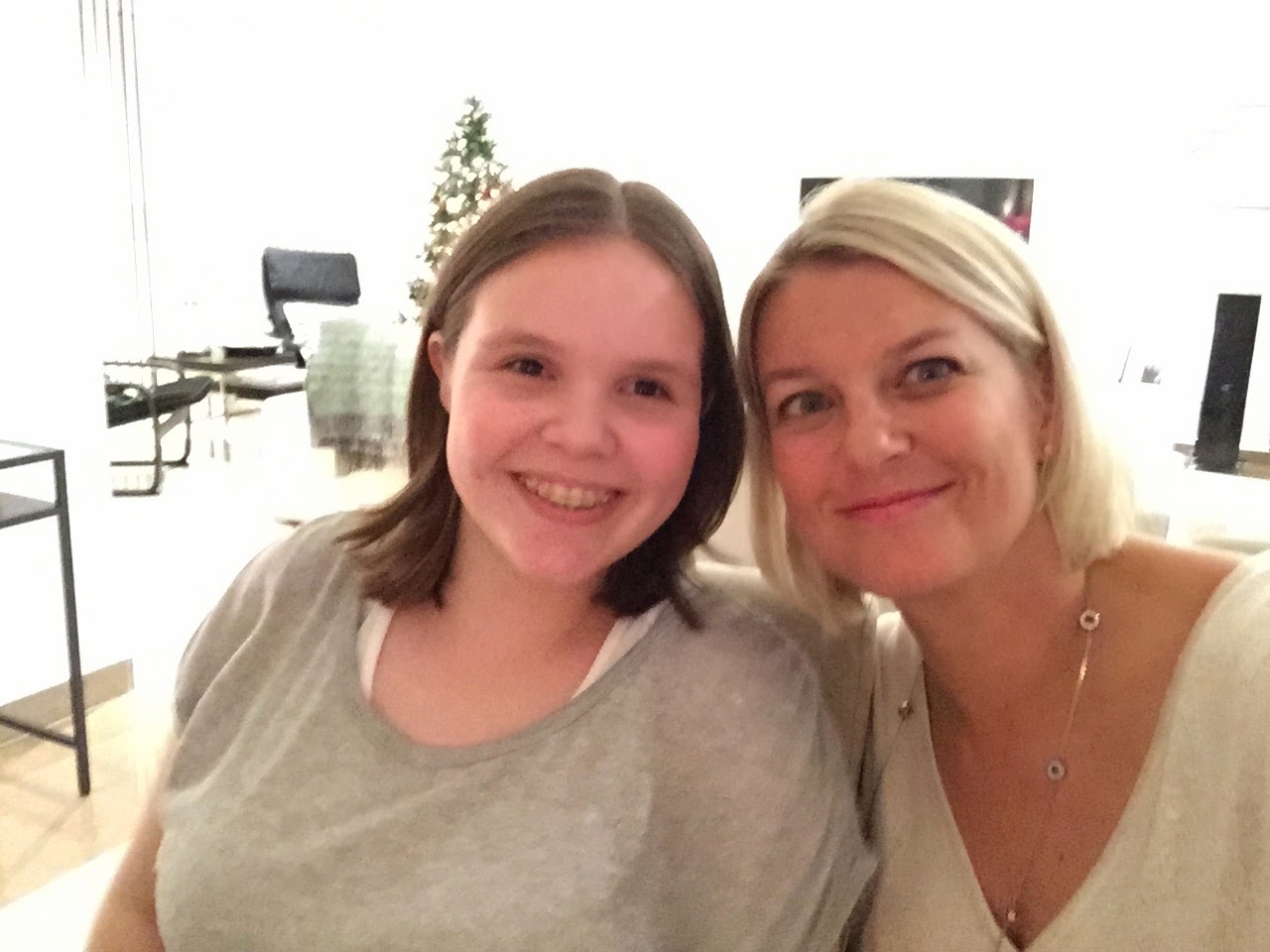 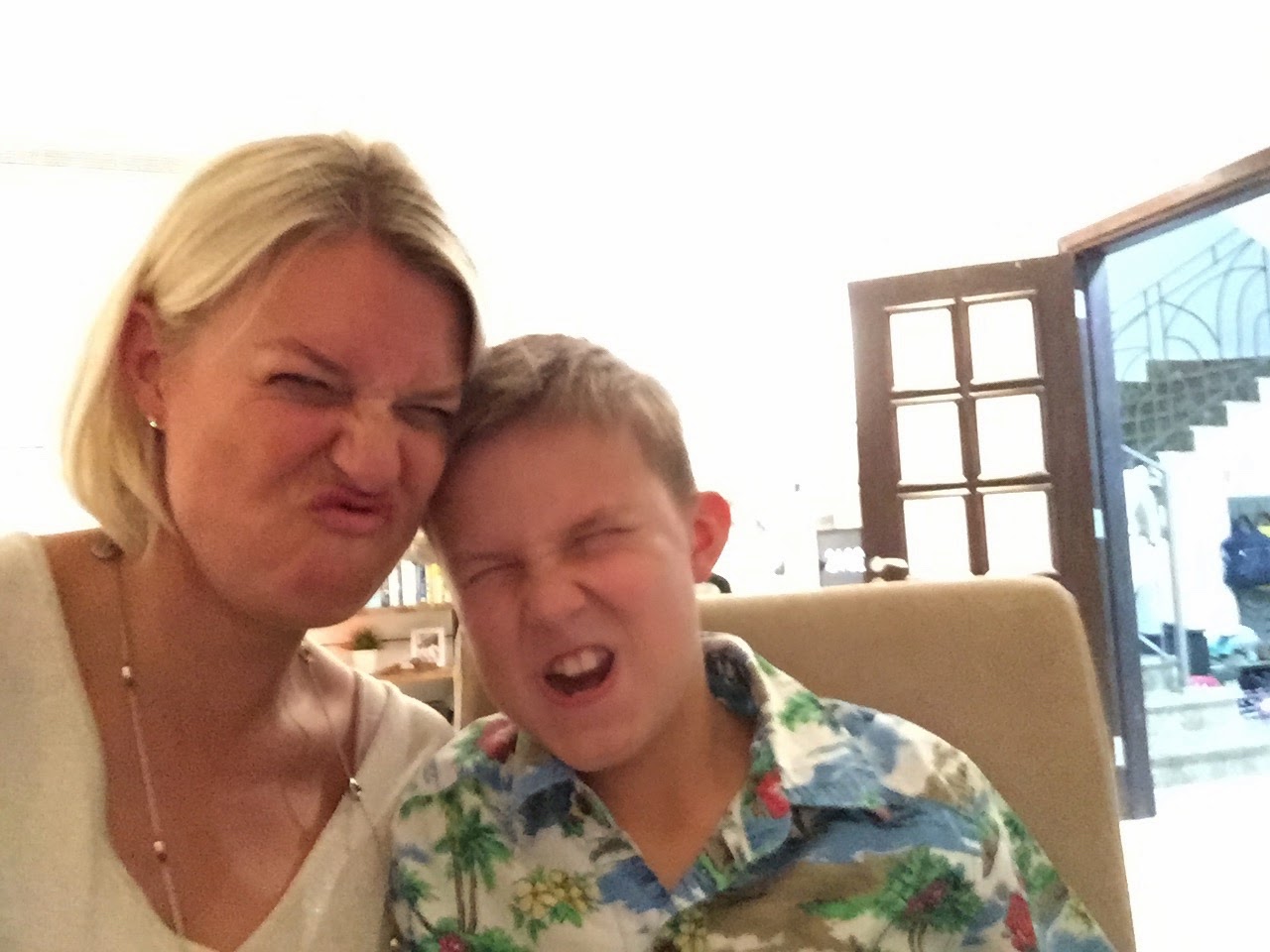 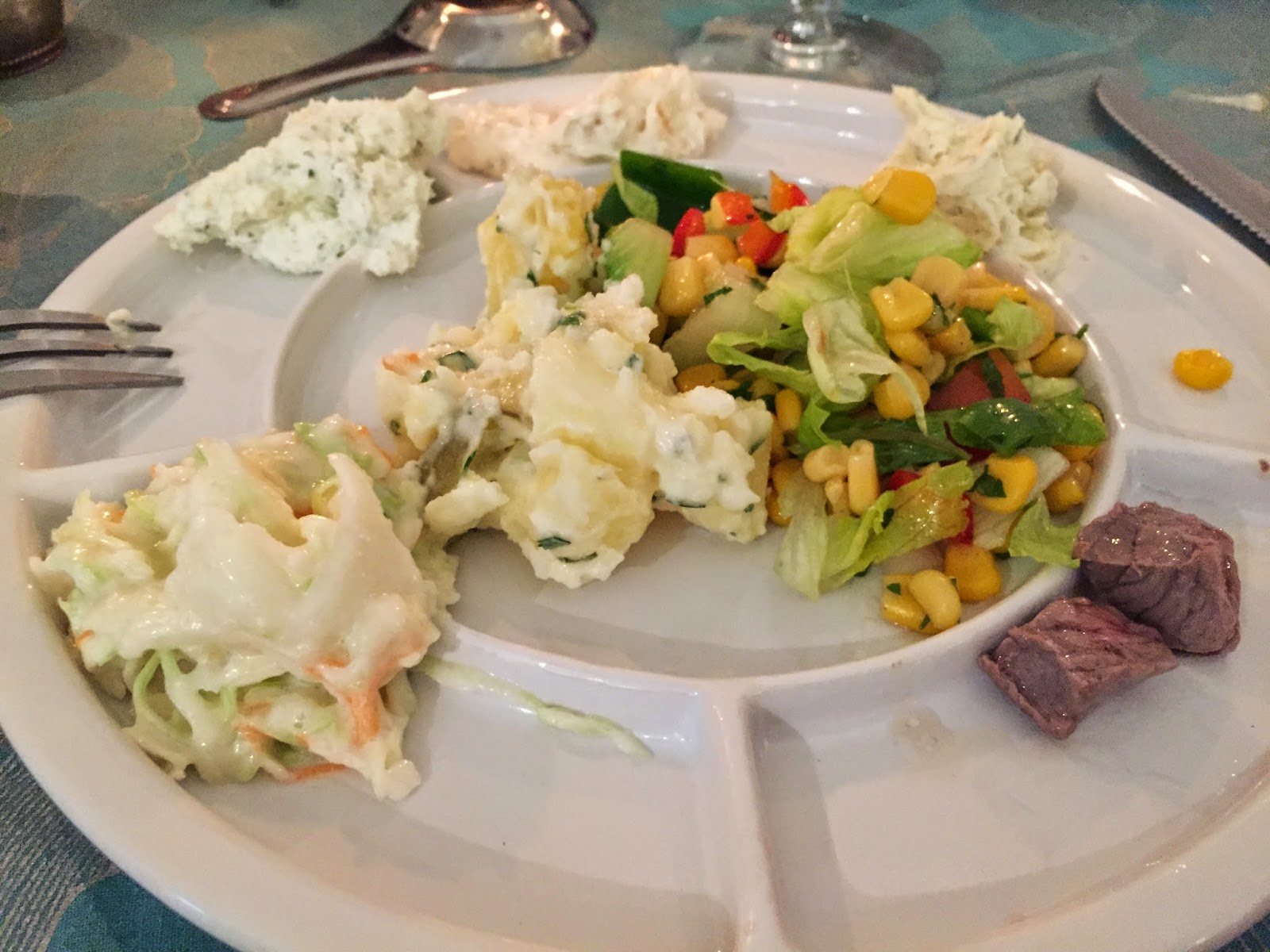 The torch fuel was doing a good job keeping the pot warm, but it also started smelling a bit, and the flames ruined the pot when they started to lick the sides of it. After a while like this, we decided it was time to kill the burner before it got out of hand, as we weren't sure how the situation was going to develop. So we lift it all outside and killed the flame. 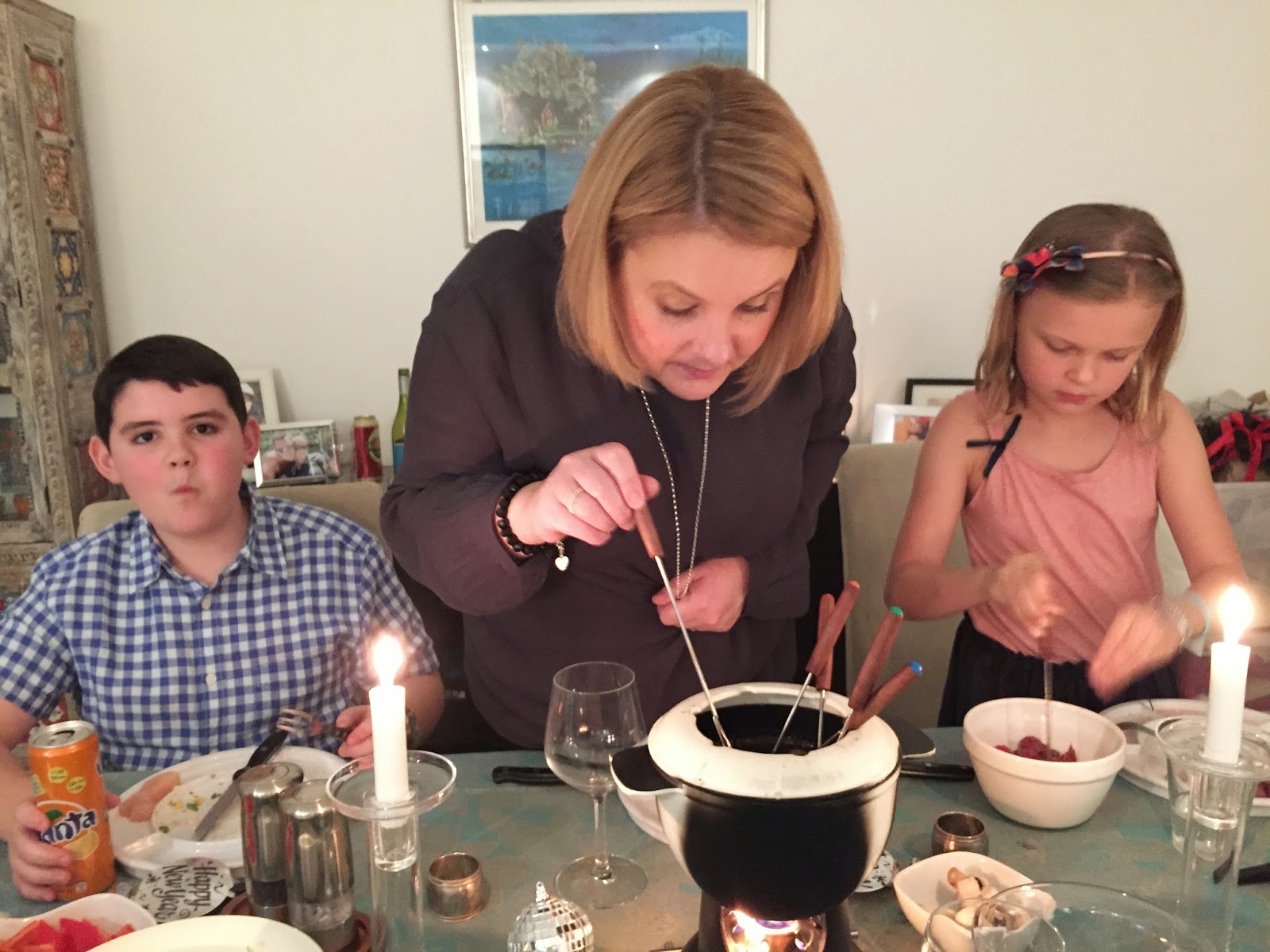 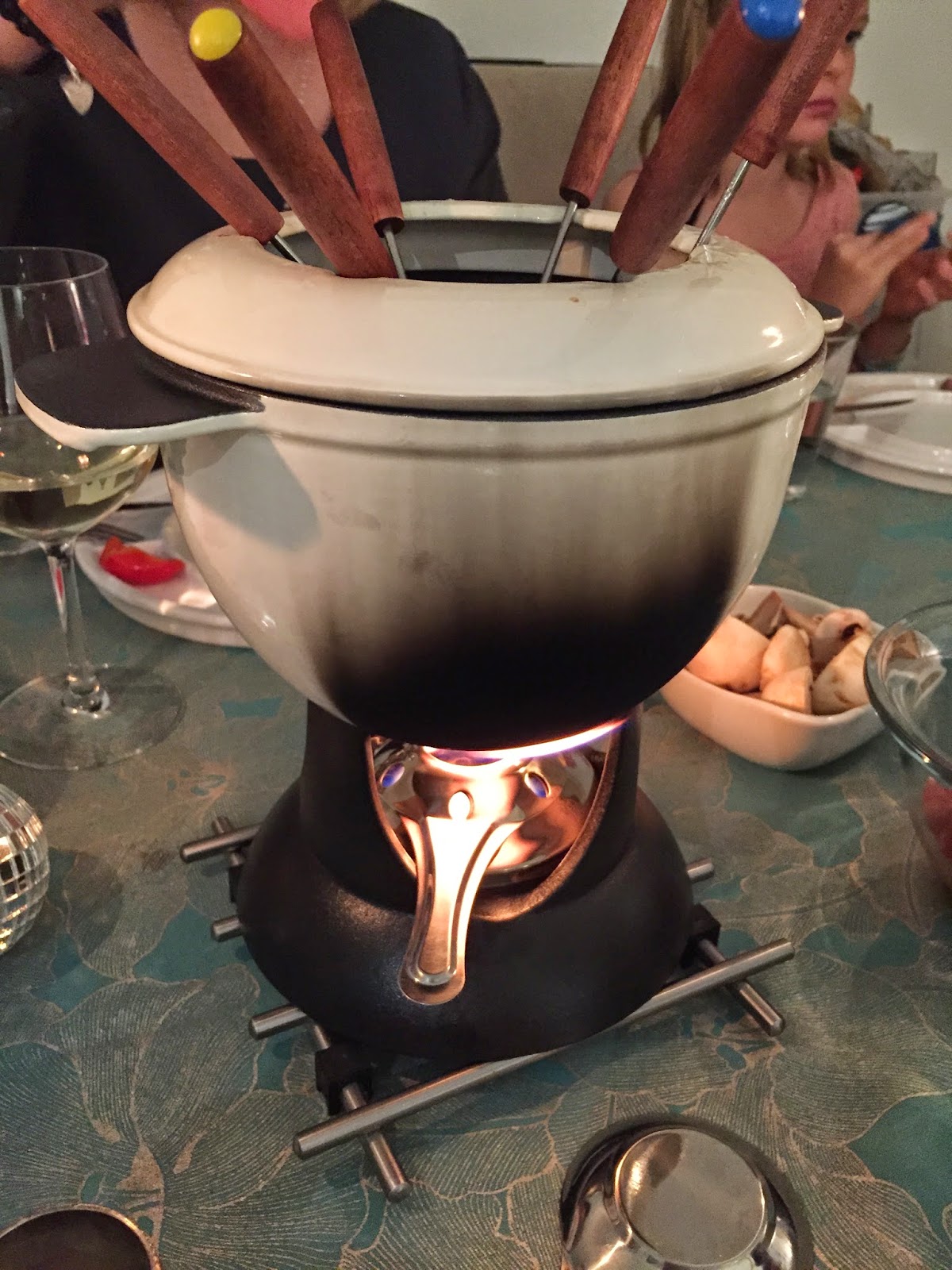 Well, this is how it developed...: 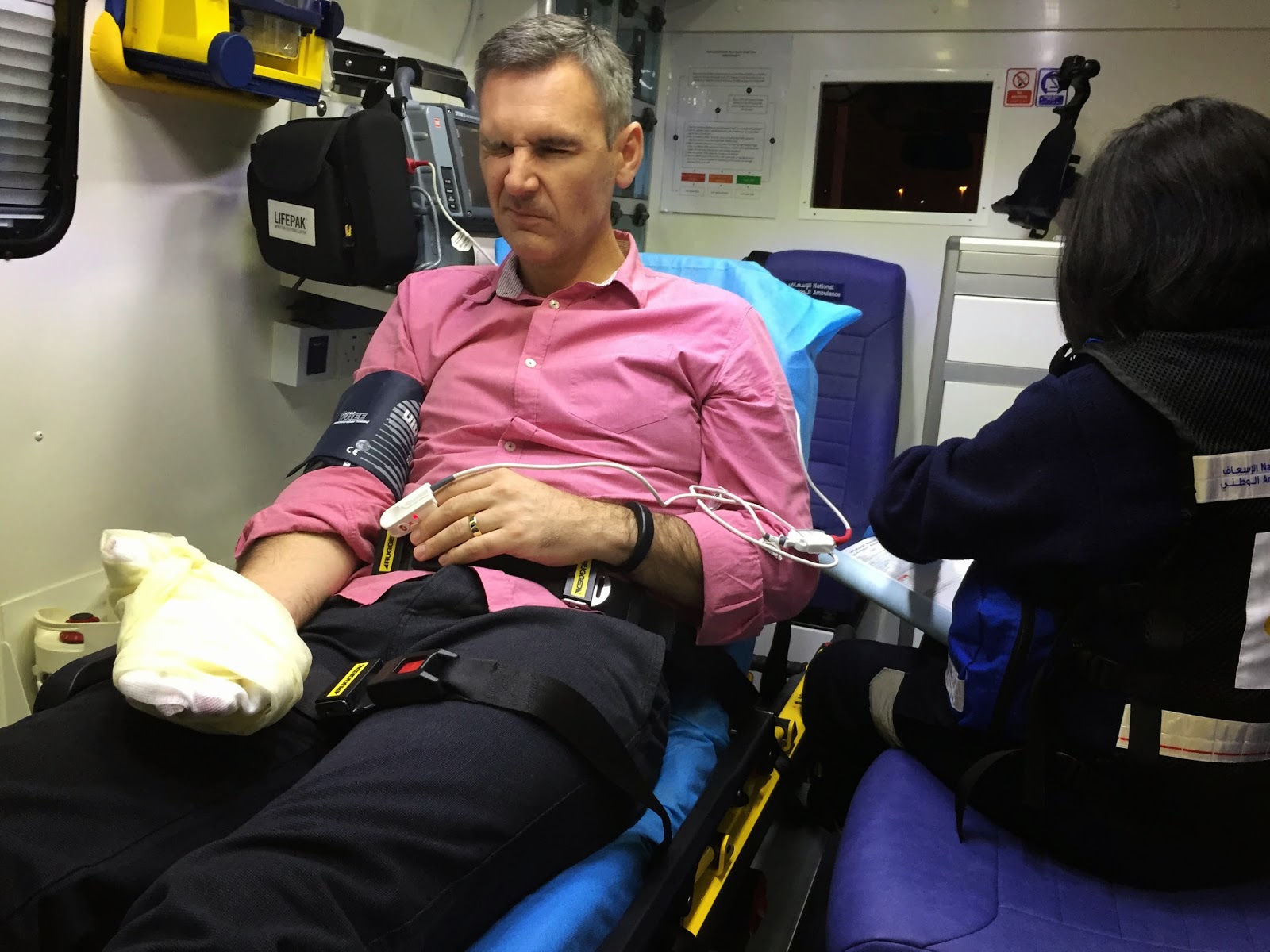 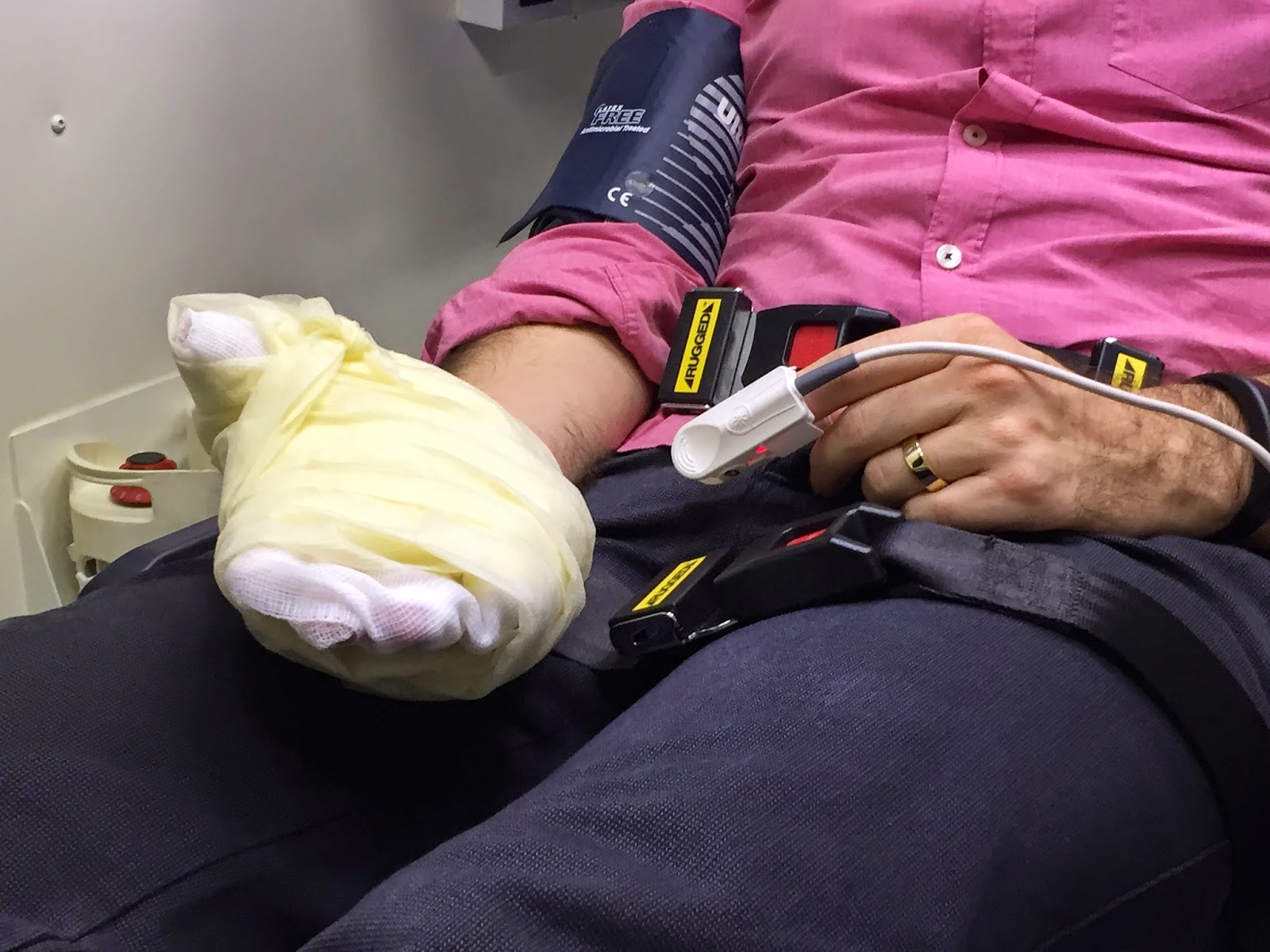 Nathan unfortunately burned himself when he was going to move the burner, after it was put out. The burning hot liquid spilled out of the burner, straight through his hot glove, and he got it on his hand.
We tried to ice it, but to no avail so we decided to call the Medical Center. We had to get in the car and drive to Etihad Plaza, and got met by an ambulance there, and the ambulance people applied some first aid. They quickly decided it was better we went to the hospital - so off we went, blue lights on and everything! 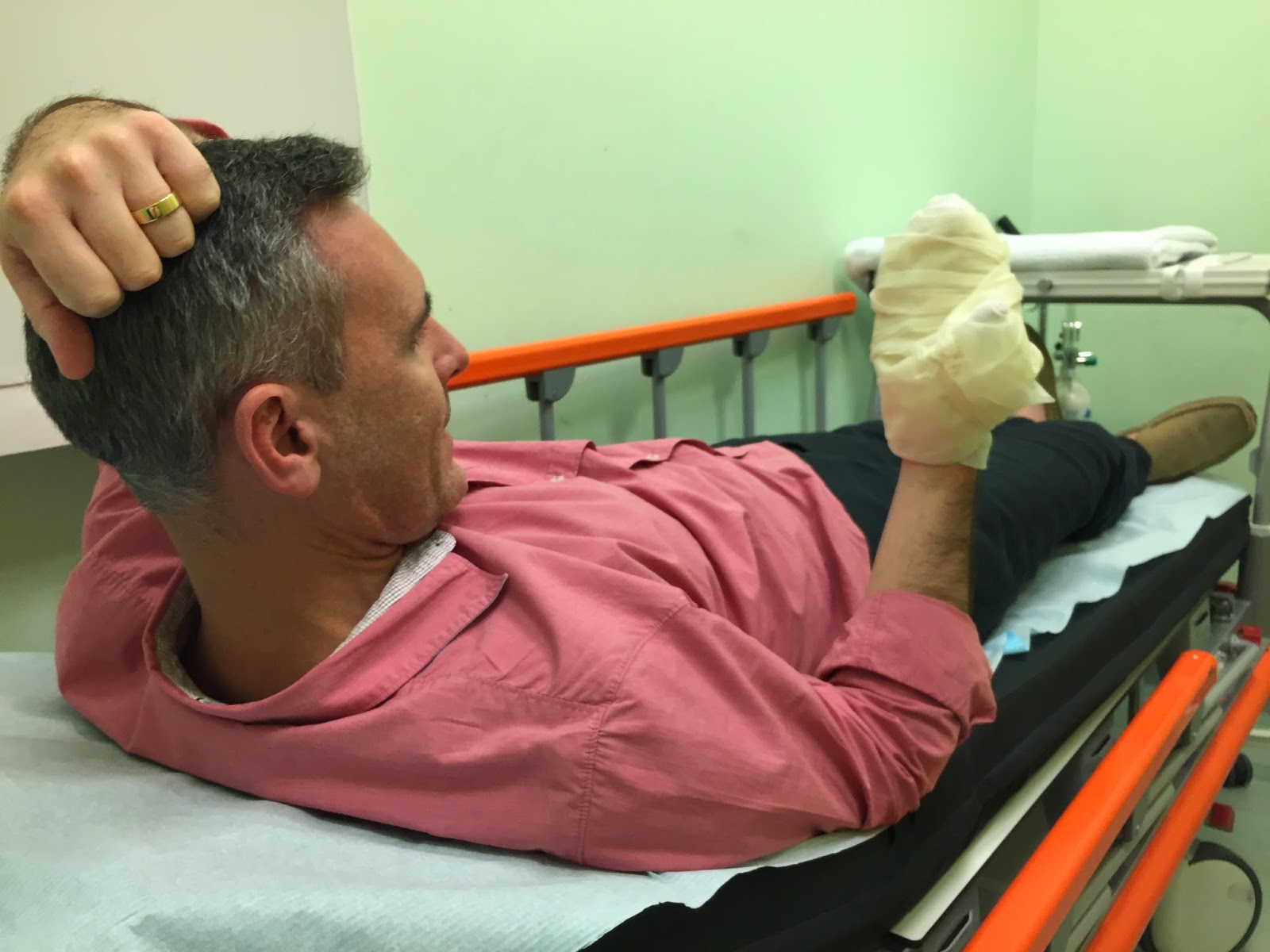 Meanwhile back home - the kids watched a movie waiting for midnight: 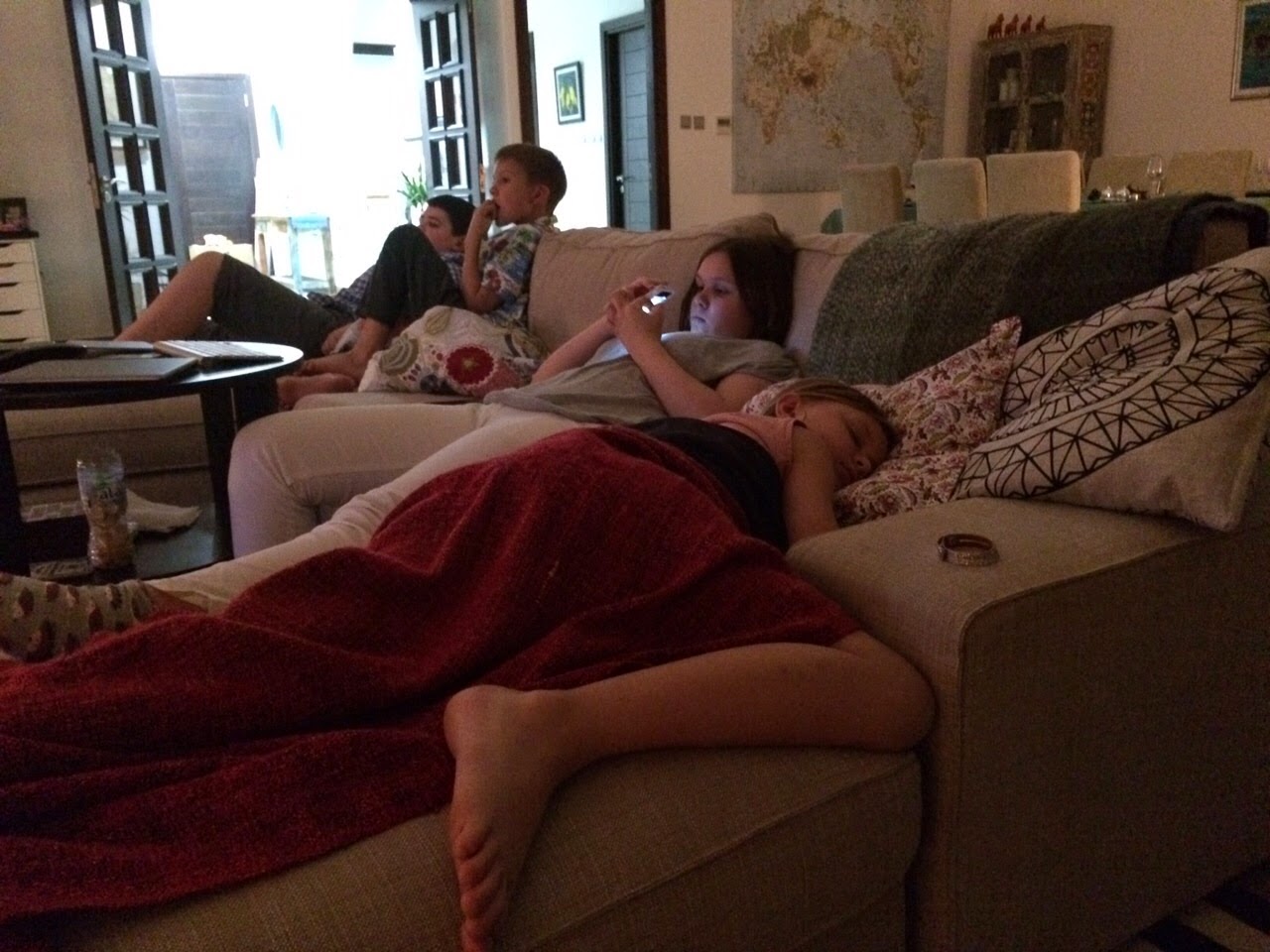 At the hospital Nathan got some painkillers and the fingers seen to. It turned out he had 2nd degree burns on his three middle fingers, ouch. 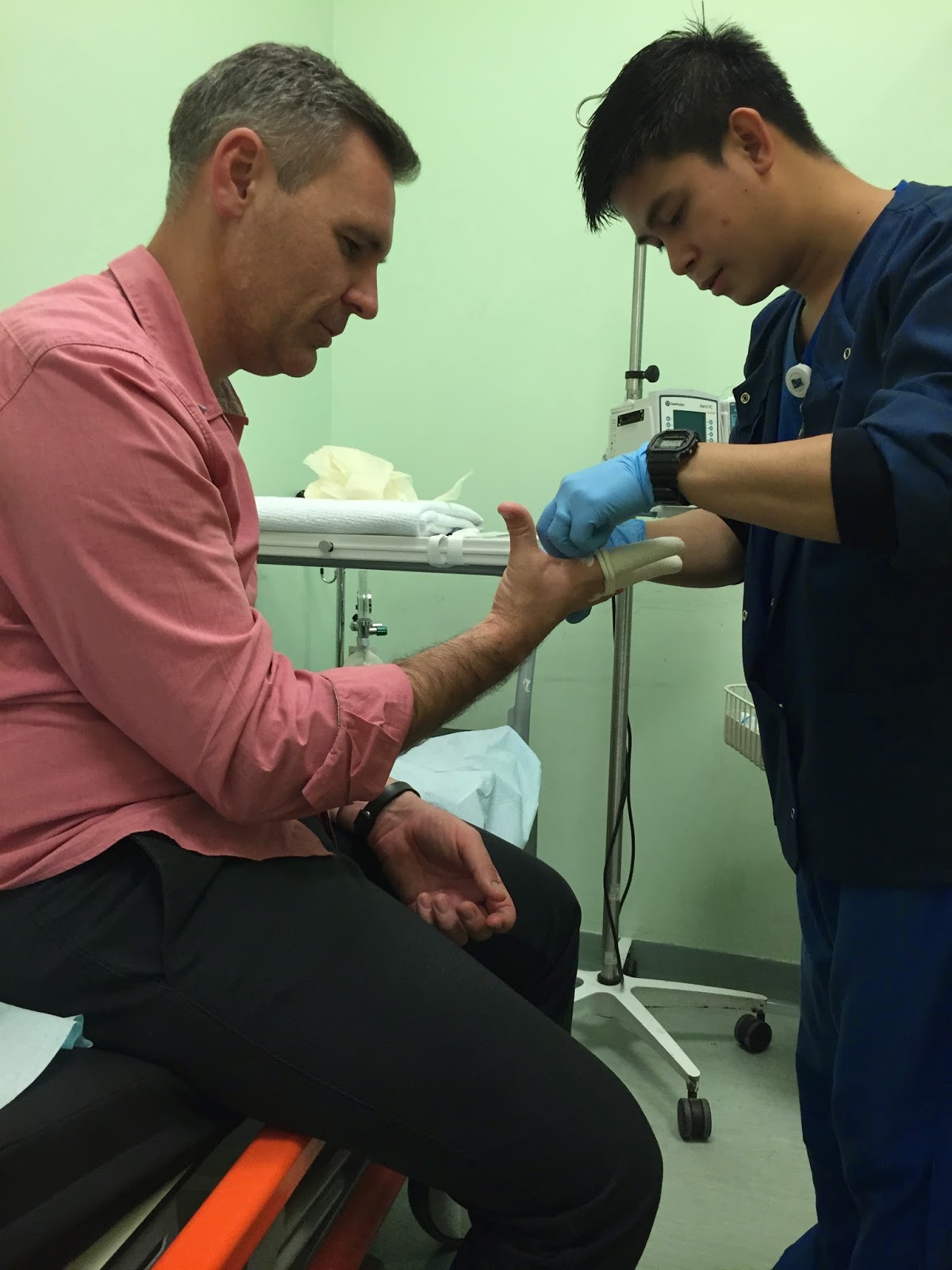 Fortunately for us, our neighbours had just flown in from NY a couple of hours earlier, and Chad (bless him, thank you!) drove all the way out to the hospital, right at midnight, to pick us up! We had to "celebrate" midnight at the pharmacy, picking up more medicine.

Back home, the kids had been traditionally jumping in to the New Year though! 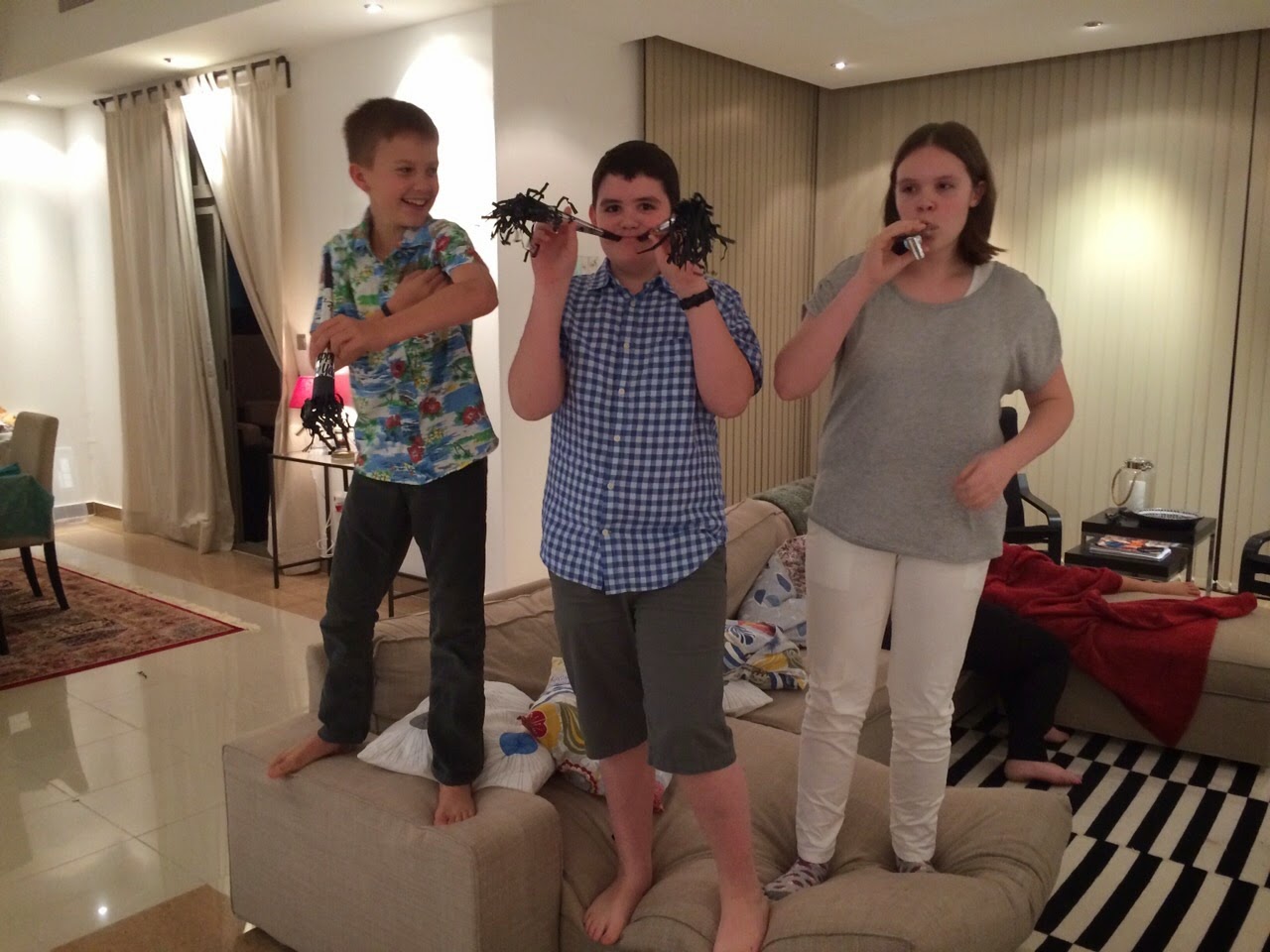 We came back about 00.30, and the party continued! Chad and Kristen came over to have some champagne, since we had all missed midnight, but better late than never! 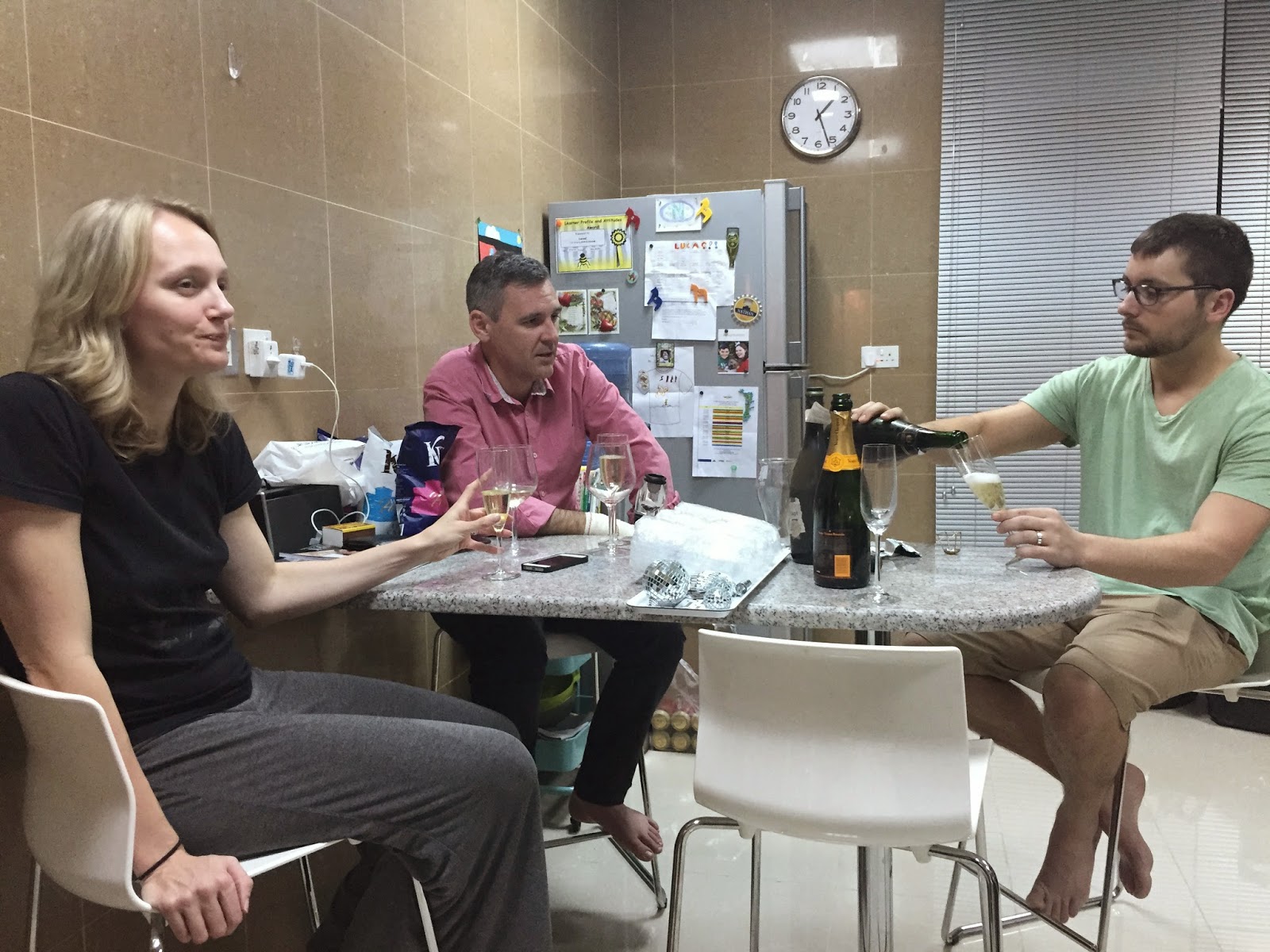 We got some presents from their trip, kids got NY t-shirts, I got Christmas tree ornaments from Washington and Nathan got - the ultimate beer glasses!! Sweet!
(Fyi, he had googled his painkillers, and when NHS said that there was no issues with taking them and having alcohol, it was all go from there..!) 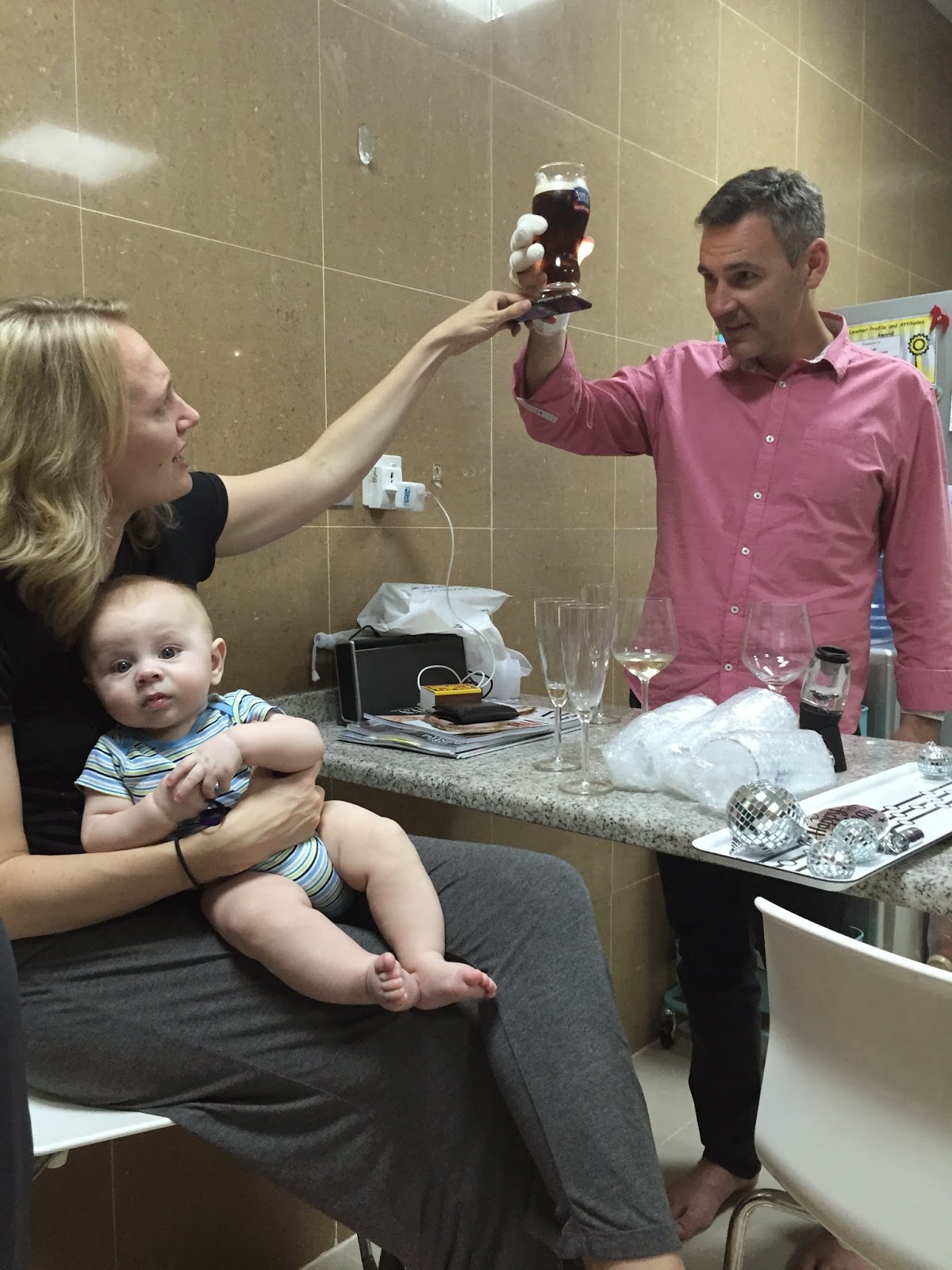 So, in the end, it turned into a good New Years Eve after all, even if we had to cut the dinner a bit short, and miss midnight with the kiddos. We still had our dessert pavlova and a few bottles of champers when we got back, so I think we caught up nicely! Happy New Year! 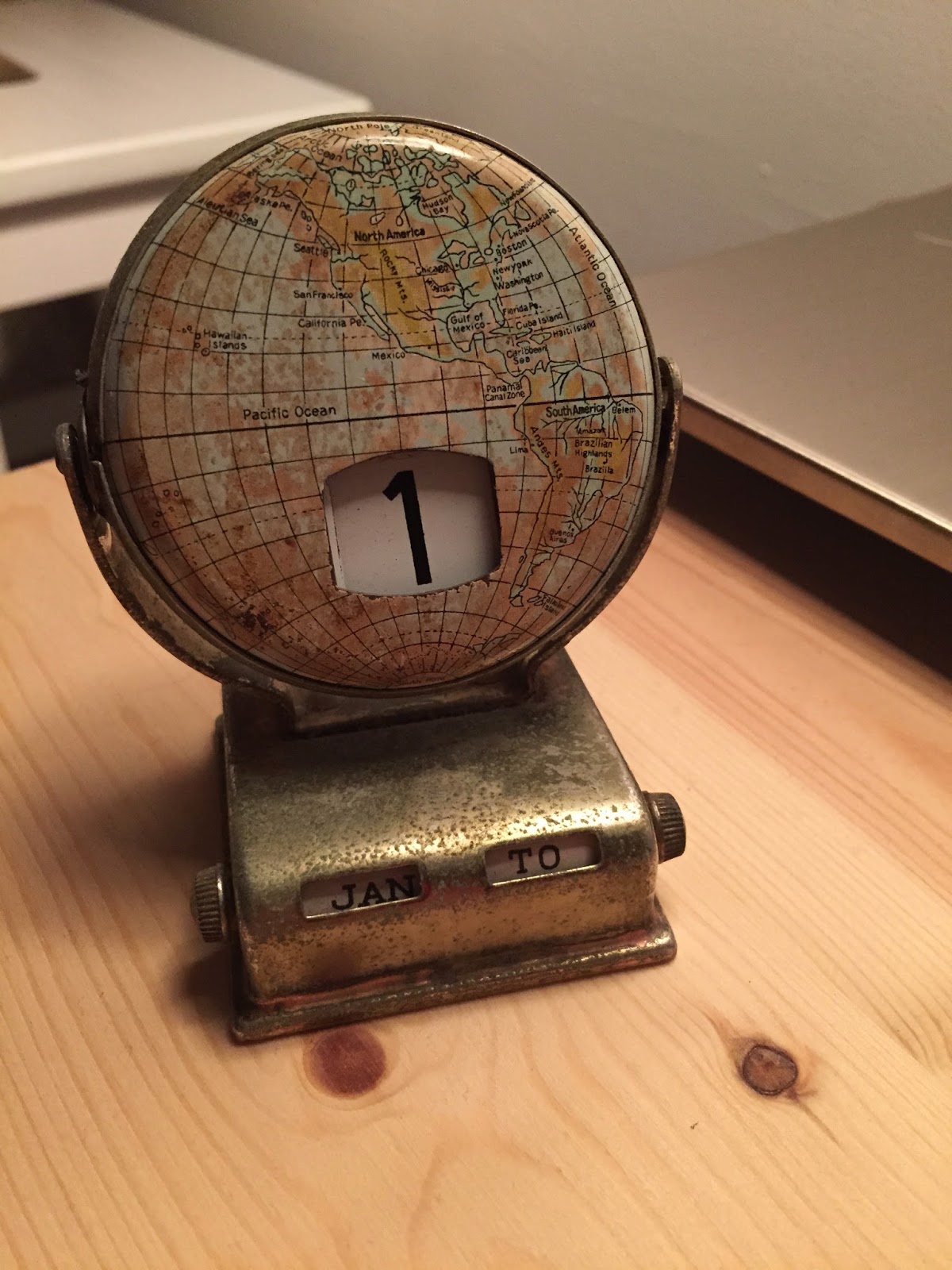 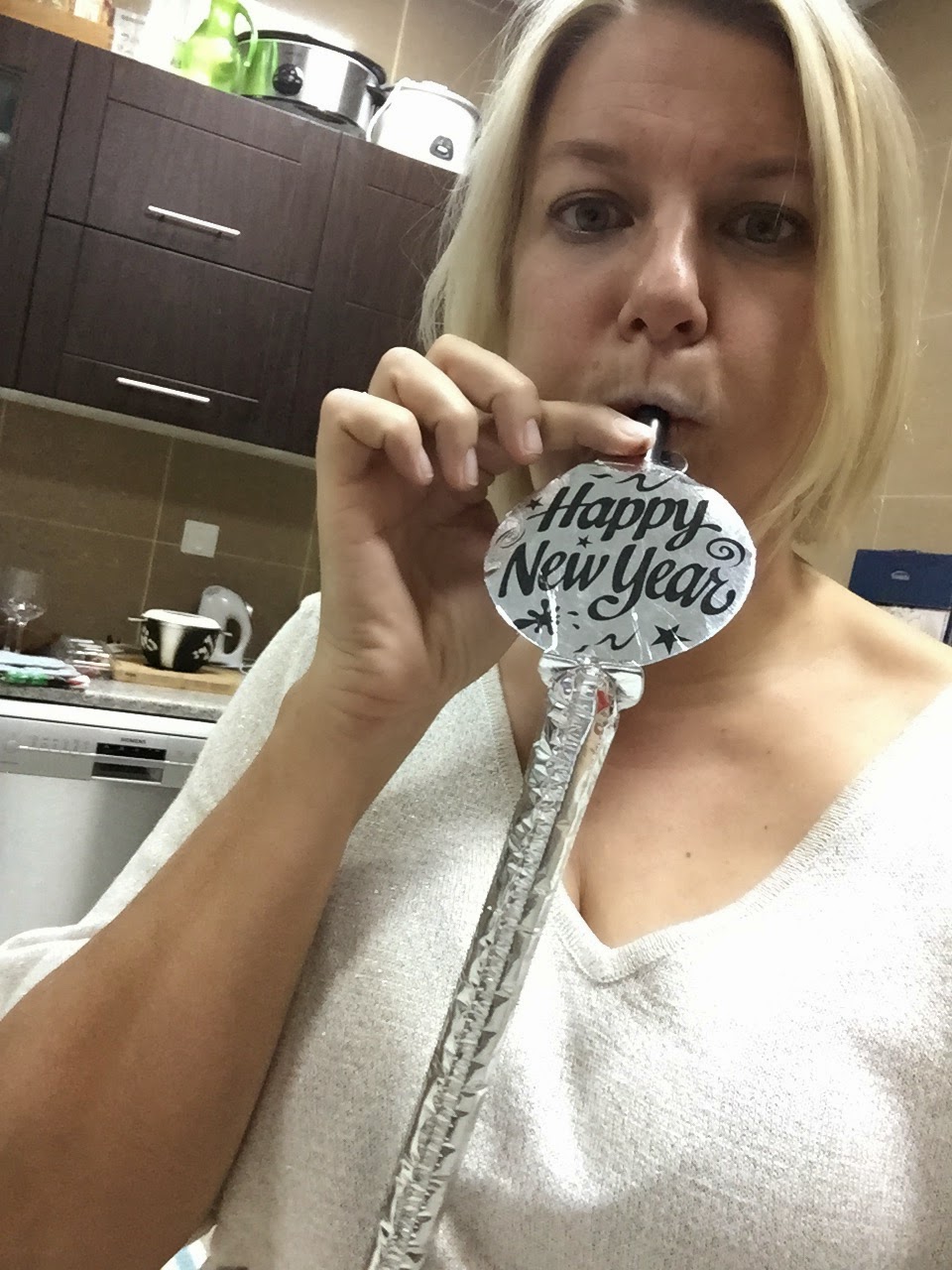