Day 97, Sunday 14 June
Woke up rather mushy after another night of what feels like no sleep (aarrghh), but to a lovely long recorded message from a friend, so that gave my day a really nice start.
Then I shot off straight away to the mall to meet up with Frida for a coffee, before I had an appointment at the Apple Shop. I needed to finally fix the screen of my phone which had been cracked since end of February. Luckily it turned out that it was actually just the screen protector which had broken, yay, much cheaper to sort out!

Nathan has been working from home all day so this afternoon I did a long workout in the Escape Room before we had mac and cheese for dinner.

Day 98, Monday 15 June
Hm, seems like I only got 4-5 good days. Today I've been back in the grey cloud. One of those days.
I was totally uninterested in working out (but did it anyway), so low on energy that I took a nap in the afternoon instead. But - it was the first time since beginning of March I was completely home alone for a little bit, as Nathan took the kids to their routine check-up at the dentist! That was different!

I made a risotto with chicken, parmesan, sweet potato, pine nuts and parsley and surprisingly it was the kids who went back for seconds, both of them. I guess all this experimental Corona-cooking has been a good thing for their taste buds.

And, no surprise - news just came through that we can look forward to yet another week of travel ban between the emirates. Expected, but getting annoying now. Come on, open those museums,  beaches and parks and pleeeeeeeease... let us see friends in small groups.

Day 99, Tuesday 16 June
Today three-fourths of the family woke up really early. Nathan set off to work and Linnea had a math test in the morning so I got up too, to be moral support. I am of course of no help at all when it comes to Grade 8 math - haven't been able to keep up since about Grade 2! I still wanted to be there in case she needed more water or something, and just so she wouldn't feel all alone.
Lucas is done with all his assessments, Linnea has one more tomorrow and then that's it for this school year. It will be hard to motivate them now for the last two weeks, even though school has said they will need to attend as usual, as they will get assignments to prepare them for next year etc. Hm.

I've had a good day again. It's actually got nothing to do with what happens each day, I can feel already from the moment I wake up what kind of day it is going to be. Today it was nice to get up a bit earlier than normal and have a long morning! I did a solid workout of both running, strength and some HIIT before a good lunch and then I was off to the mall.
Grocery time, but I started with a bit of a walk-about. I can report that one lap of the mall (Yas Mall is built in a big circle) is 600 meters and takes about 7 min 25 seconds to complete.
I also bumped into two other Swedish girls and crashed their coffee date. We got a "table for three", as the waitress said... ha ha! Regulations say only two on each table, so we were placed like this: 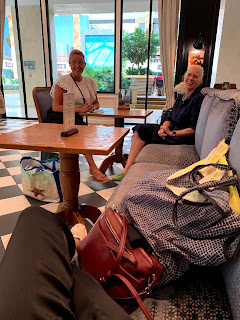 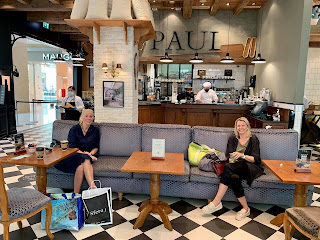 No problem though, we could still have a good chat - as long as the coffee grinder wasn't running! Ha ha!

Day 100, Wednesday 17 June
Day 100! A hundred days since we last saw friends at home, under more normal circumstances... Oaw. Well, at least we can meet at cafés and coffee shops - so we do! Today I had lunch with Linda to wish her happy summer, as she is braving it and leaving for Sweden this week. I like how they limit the numbers at this particular restaurant, it looks very pretty! 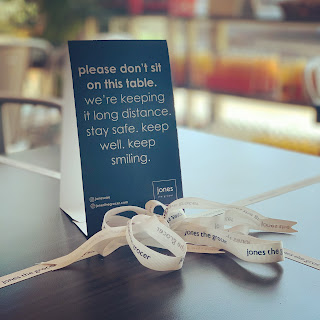 This afternoon it was cleaning time. Another week, another cleaning mission done! We are really starting to get the routine going really well, but I still look forward to when we are allowed to have the real cleaners back...

And the best news today - Louvre Abu Dhabi is reopening next Wednesday! Guess who will be there first thing?!

Day 101, Thursday 18 June
Everybody is following the the news very closely at the moment, as many debate about travel or no travel for the summer holidays. Yesterday there was new travel rules announced which will come into place from next week. Unfortunately much of the new information which has emerged so far is a bit unclear and feels incomplete, so speculations are many about what needs to be done or not before traveling, and more importantly to be able to come back. I am trying to stay calm about it all, bide my time and wait for it all to become more clear in the next few weeks, to be able to formulate a plan.

In the meantime today has been another homely day with the usual activities, morning workout for me and school for the kids. From today the kids have been allowed to move back into their rooms for "school", since all the tests are done. So while they were up there and Nathan at work, I spent the whole afternoon feeling home alone for a change!
Pizza for dinner, and bring on another weekend.
Posted by MrsW at 21:52