Day 95, Friday 12 June
Who would've thought! It's the third day in a row I wake up in a good mood and the day ahead feels bright and sunny - even though we (of course) have NO plans other than the usual, it makes a change not feeling like your head is buried in a big grey cloud at least!
I have noted that most of my coronacoaster feelings are due to hormones and comes in cycles, so I really value the days when I am able to control the sad and hopeless feelings that flutter around inside constantly.

A bit of a workout to start the day, one of the better omelettes I have ever made for lunch, and then I took Linnea and went - ... to...  the mall!! Ha ha, no surprise...
Well, she needed fresh underwear too, so I took her back to the shop with the super helpful lady from the other day, and we got mission accomplished very easily! We also browsed the other shops, as having the fitting rooms open is a real game changer; plus there are huge sales everywhere. Linnea scored a bunch of new t-shirts and socks, all which was very much needed. 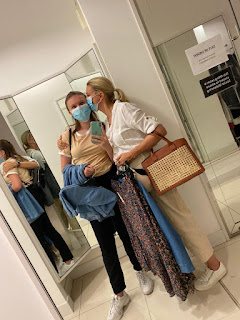 It was actually a rather nice outing. The mall was super crowded, like any other normal Friday afternoon - and I think it was exactly that feeling of "normal" which all of a sudden made it feel so good! (Even though I normally don't like Friday afternoons at the mall and try to avoid them as best as I can for that exact reason, ha ha!)
Now I take any feeling of normality, wherever I can get it. Normality gives hope.

Day 96, Saturday 13 June
Oh no, a night of weird dreams and bad sleep again. Just as I thought it had turned around for me. Maybe as the days get "sunnier", the worries and anxiety still inside gets dealt with in the subconscious?

Today was another day that just kind of happened. Linnea tried to apply a different strategy to make the weekend last longer by only doing "boring" things. I'm not sure it worked all that well for her, day is gone - just like that. Lucas spent it in his room, Nathan was at work and Linnea and I, well, I don't know. We watched some TV, I did some ironing, my workout, and dinner - the usual.
Time is a funny thing these days. Because of the Groundhog Day-feeling time seems to stand still sometimes; but also because of the Groundhog Day-feeling - it seems totally weird that we somehow have made it from beginning of March to now middle of June, just like that! Crazy.
And tomorrow it's time for another week of school. Bring it.
Posted by MrsW at 21:33