Day 88, Friday 5 June
Statistics, statistics... I don't look too much at the different statistics being thrown around at the moment, they will show what you want them to show.
I hear people here getting upset that the numbers of new Corona-cases per day in the UAE keep being "very high" - which, in one way is correct, if you only look at the number of new cases. They were between 700-900 cases a day for weeks, now they have been 500-700 cases for a while. Seems high, no? BUT - you have to take into consideration the number of tests being done in relation to those results too. Only yesterday, there was 54,000 tests done here in the UAE (yes in one day) - so the percentage of affected people is actually rather low. Today, as another example, there was a higher number of recovered cases (765) than new (642) - and 37,600+ tests.
Death toll in the UAE to date is 274. Compare that to Sweden, who has about the same amount of inhabitants - but more than 4600 deaths at the moment! I know Sweden also has a much older population, but still. Interesting figures.

I woke up and felt like baking today, but first I decided to do my workout to get it out of the way. Then after a few hours in my Escape Room I didn't feel like baking anymore... ha ha. One of those days. Read my book a bit instead, had another coffee. Cooked dinner and took care of all the other usual chores.
Chores... I'm so bored of the chores by the way! Normally I just get on with them, in between all the other stuff - but when it's the ONLY thing you have to do, it gets really, really boring.
A silver lining I guess is that the kids have really got to understand during this quarantine time what is being done here at home, all day and every day, while they are normally at school. During the past few months they have got to experience the monotonous Sisyphus-jobs themselves - and realised that they never end! 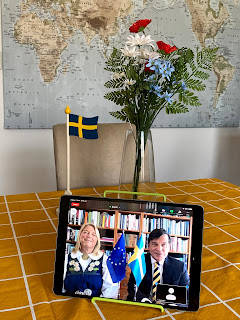 Then I finally did that baking, so we could enjoy a special cake for this special day! See the little Dalecarlian horses on the flags? 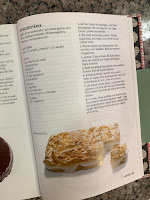 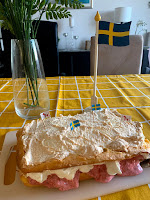 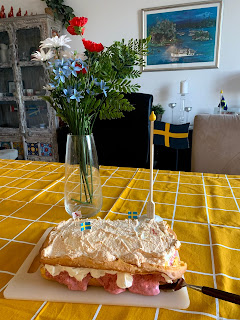 It was this Swedes first Swedish National Day! 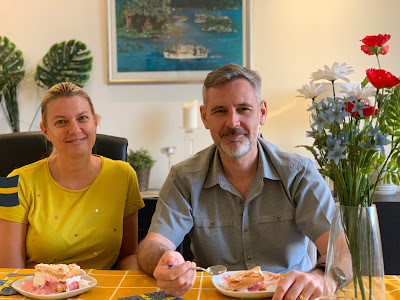 And Linnea missed Mormor, so she baked 'Schackrutor', something they always make together in Sweden. She didn't think they turned out the same, but I think she did a great job all by herself! They were yummy! I love shortbread cookies! 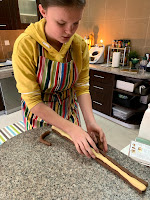 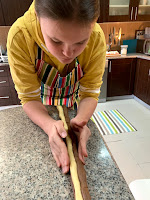 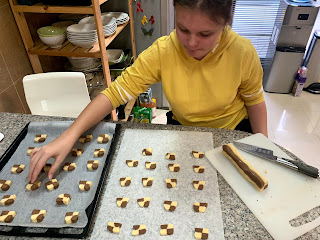 For todays musings, I have been thinking a bit about our home. I have always liked our house. I am a real house mouse who enjoys my home, coming home when I have been away and generally spending time in my home.
But having spent all this time at home lately, and just at home, it feels like my home has been "worn out", and I don't like it. It feels like being here, and only here (all day and every day!) all four of us, has put a strain on the house. It doesn't have that homely feeling anymore. I don't enjoy it anymore.
Right now I would rather be anywhere else. No specific place, just somewhere else than where I have spent EVERY day these past three months... - and not at the mall!!!
Posted by MrsW at 19:21