Most of the time I'm mighty impressed with the health care here in Abu Dhabi, sometimes I get confused by it.
We were told by the Doctor when he put the full cast on Linnea's foot to come back to have it removed in 10 days. Although today when we turned up we were asked why we wanted it off..?? As if it was our decision..? How would I know?
I mean, wouldn't there be a certain amount of time you should have a cast on for this specific injury - after which you take it off? That's what I thought. Or that an actual Doctor would do the assessment of the foot and the injury, not ask the patient or the parent to self diagnose? Hm. 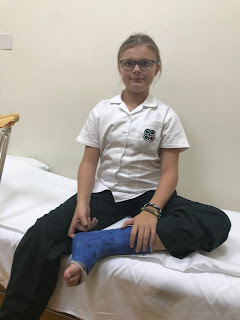 Anyway, the took the cast off (finally!) yesterday, and it's all good. 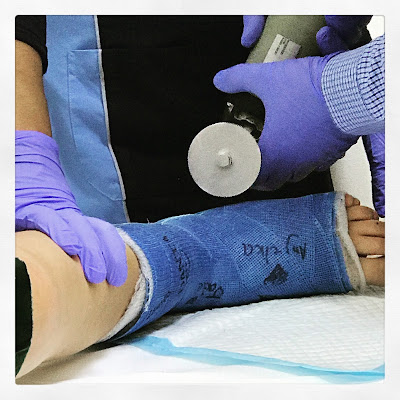 I think being on crutches was "fun" for the first day or two, to get all the attention and get to use the elevator at school. But by now she had had absolutely enough.

The foot is still a bit blue and the Doctor said it would take a few days for it to feel normal, so she is still on her crutches at school today. We don't have many plans for the weekend, so she will have plenty of time to rest.
Posted by MrsW at 20:13

Email ThisBlogThis!Share to TwitterShare to FacebookShare to Pinterest
Labels: Linnea