One of the biggest downsides with our compound is that it has no communal pool. They did initially promise one would be built, but we fairly early lost hope about that, so we have other solutions for going swimming and keeping cool.

There are only two public (free) beaches in Abu Dhabi, and since they both are both downtown we have actually not been to either of them. Otherwise if you want to go for a swim, you either have to pay an entrance to the private beaches (at least 50 dhs per time), buy a pool day pass at any of the hotels (even more expensive), or own a boat!
So our solution - a family Annual Pass to the water park is actually not a bad idea! We have had an Annual Pass two years in a row now, and made sure to make good use out of it!

It's practical because nearly every visitor we have wants to go to the water park, and then we can join without having to break the bank each time. We also often go just for a few hours on a weekend morning before the big rush, or after school for a few hours. When you have a pass, you don't have to feel you have to do it all every time - some days we just go to float around in the lazy river, some times the kids only do the slides, or the wave pool, or the surfing; and sometimes we just lie in the sun and relax.

Our current pass expires at the end of the month and we have decided to hold off on getting a new one until we get back after the summer. It'll be too hot to even be anywhere outside in June anyway.
So at the moment we are making the most of it - we have been the last few Tuesdays (when the kids finish school early) and met up with friends of the kids for some midweek fun. 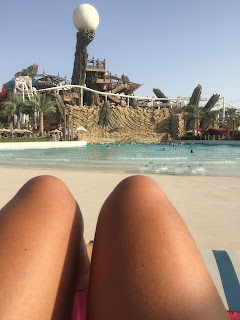 Yesterday it wasn't much fun for Linnea though, as she misjudged a wave in the wave pool and tried to do a backflip in the water, but ended up scraping along the bottom. She scraped her lip, her nose, her forehead and everything in between. There was a lot of blood but after rinsing it all off, she was all good again, albeit with some big scratches right down her face... Our little clumsy clown... 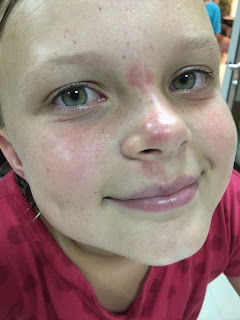