Seven hours at 7he Sevens

Today (on our "Sunday"), we were up earlier than a normal school day! I was in the kitchen packing a huge cool box with snacks and food at 6.15, and we were already on the road by 7am! Going where? To Dubai and the famous Sevens Stadium, for the kids to participate in the HSBC Rugby Festival.

Both kids played, Lucas in one of the two U11 teams, and Linnea in one, out of the three, Girls U12 teams. This event had over 4000 players participating, from Oman, Qatar, Bahrain and the UAE, making it the largest grassroots rugby tournament gathering in the Middle East.

The kids played in two different areas, with a long walk in between. Hence not easy to manage, as I was on my own. Luckily Lucas played first and since his team didn't win any games, they were done after the pool play - so then we could move over to Linnea's pitch.
Lucas is in a grey helmet, standing in the far behind the scrum: 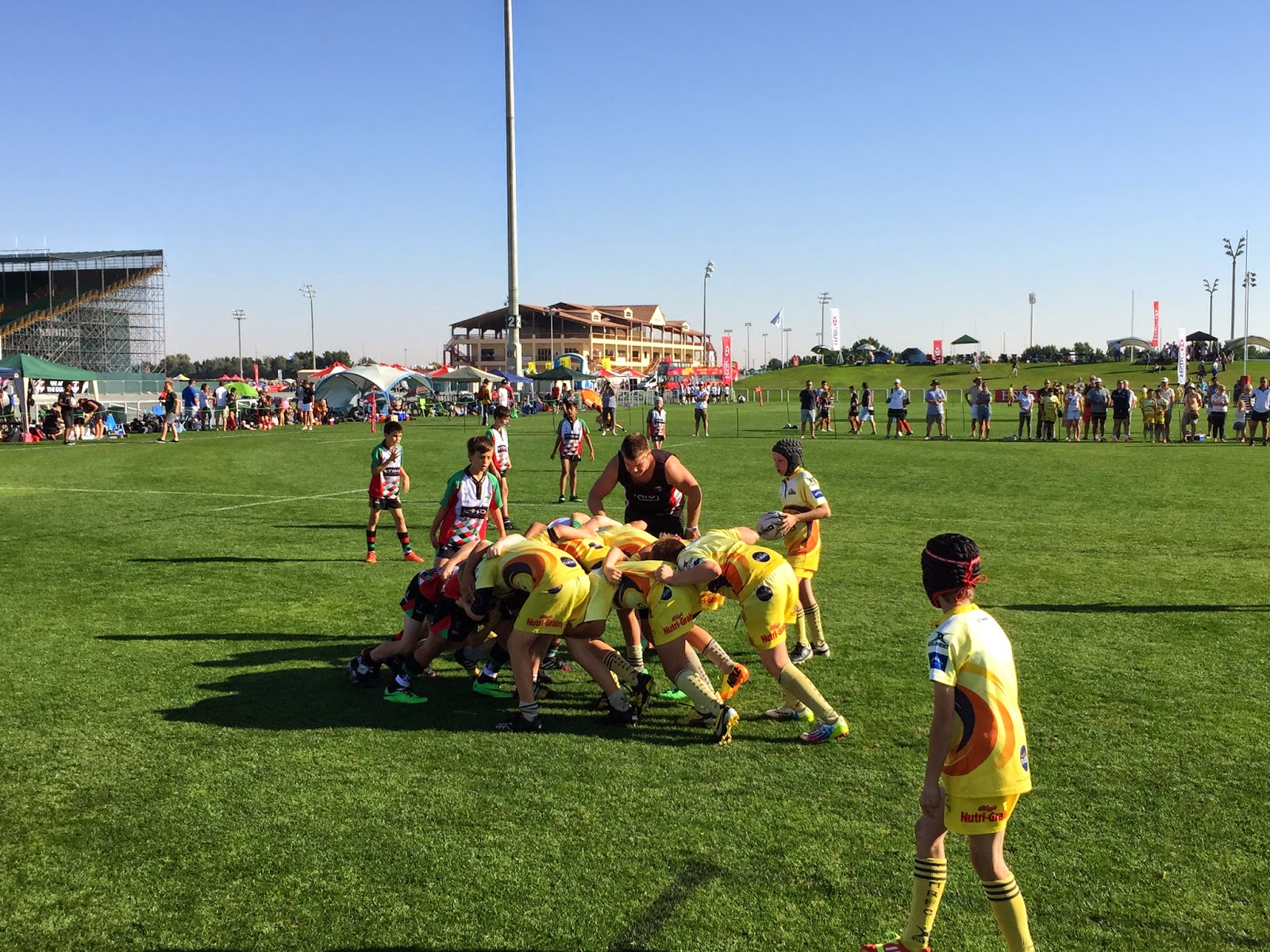 He is on the wing, so he didn't get into the heat of the play a lot today (either...), but he said in the car on the way home that even though he didn't get to touch the ball much, he had had a great day. 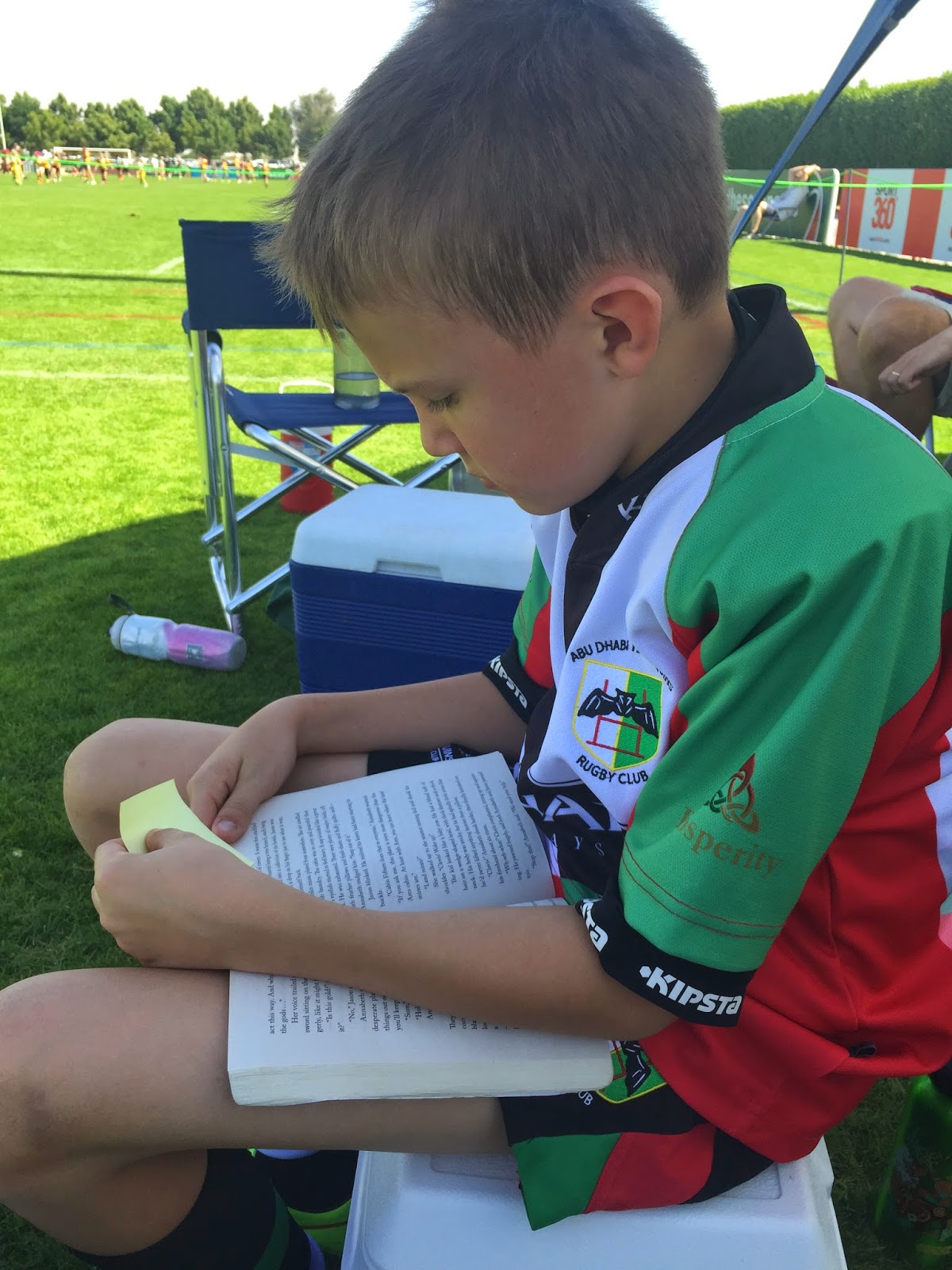 He probably had the best time while he was waiting for Linnea. He found some other friends who had finished their play, and they found lots of stuff to do. Besides the action on the pitches, there was plenty of activities to keep spectators and players in waiting busy. 7he Sevens is a great place for a rugby tournament as they also have a good selection of food stalls and there was live music pumping all over the area, to keep the atmosphere vibrant.

Linnea and her team: 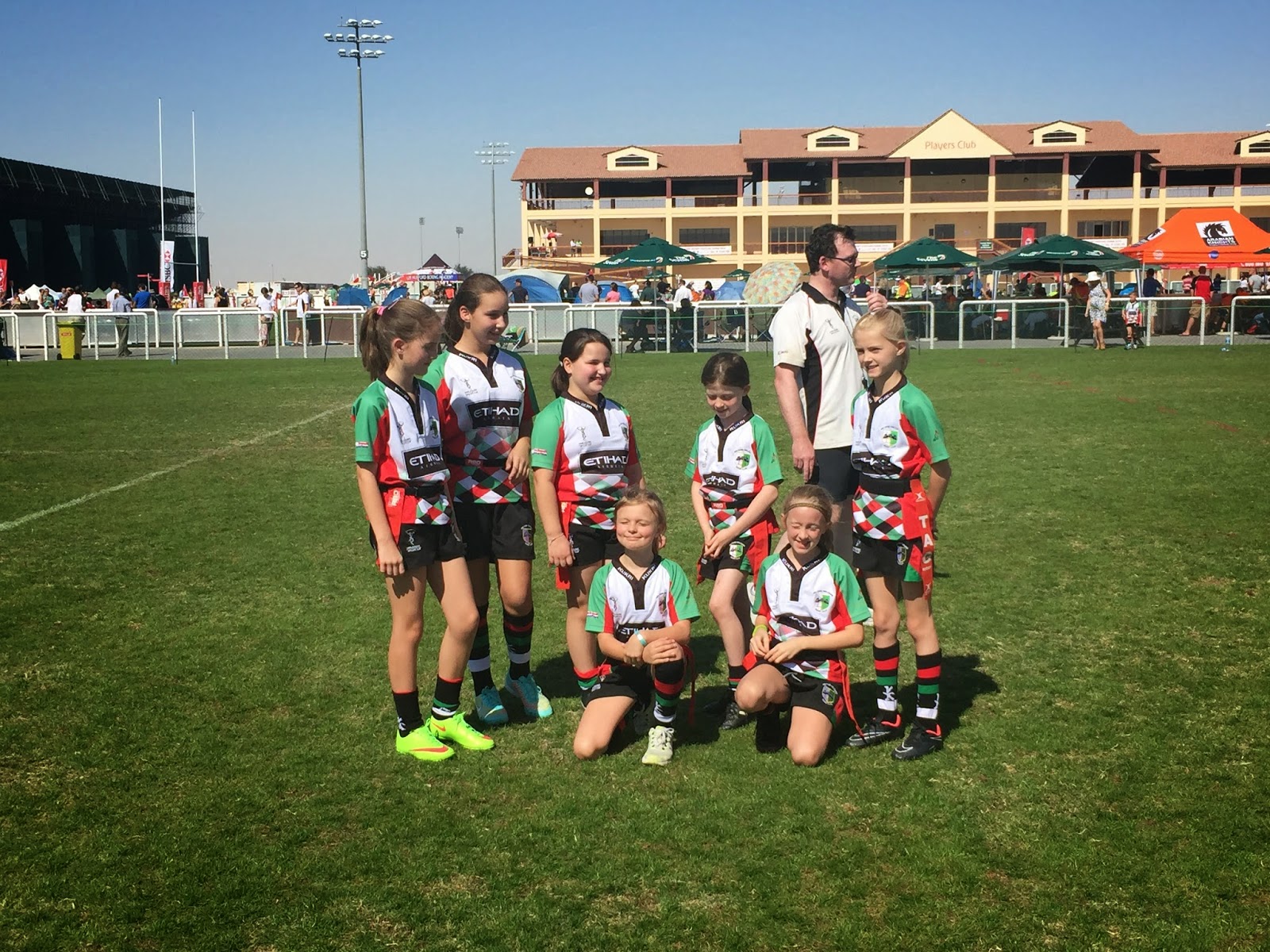 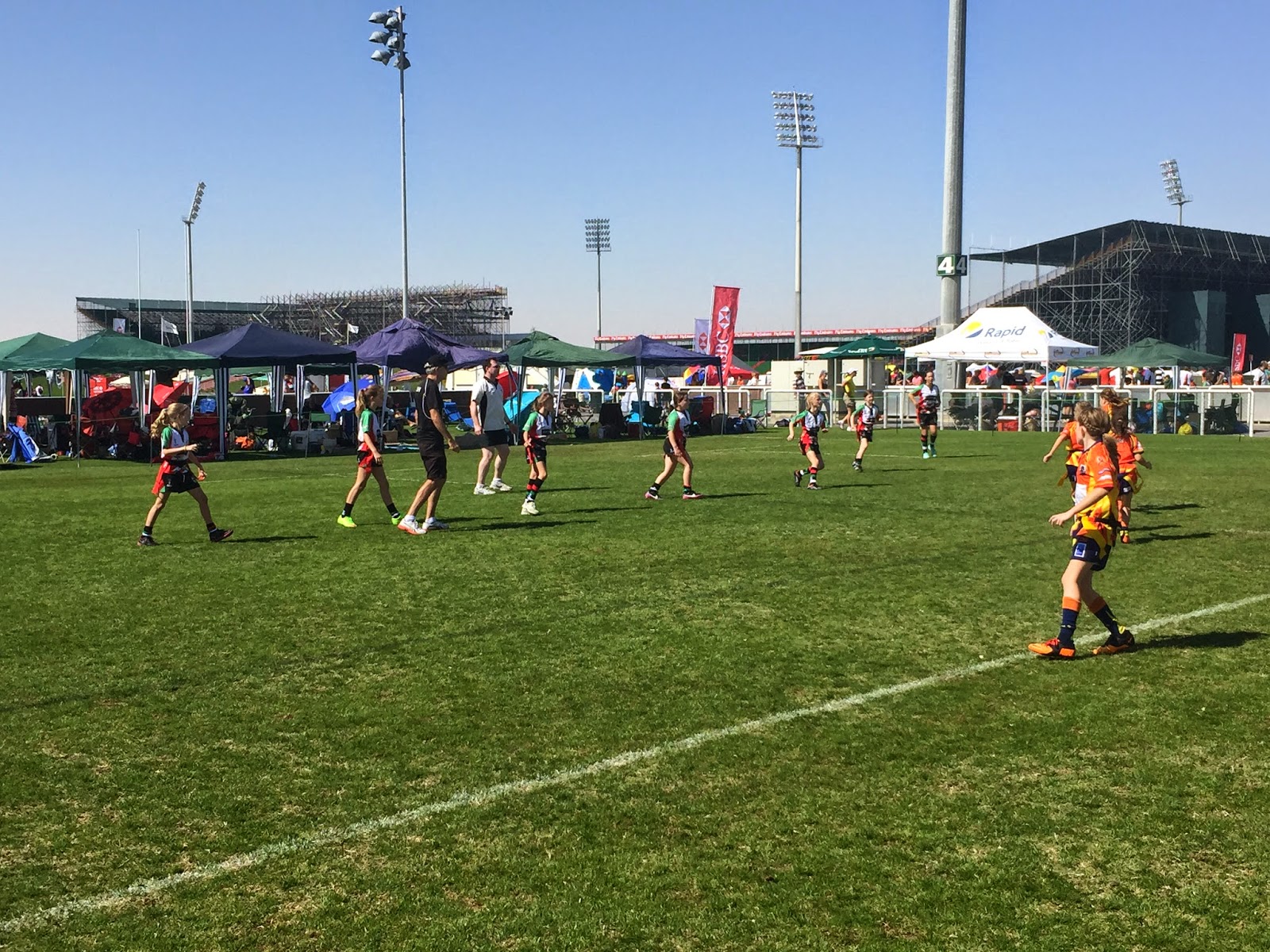 They played four games, and also lost all, although, a couple of them were chillingly close! I watched all the games and I must say that Linnea, and her whole team, got better and better for each game. They did some basic and silly mistakes (hence their losses), but they also managed to learn from their mistakes, and strengthen their defense and develop a nice flow in their passes - and, Linnea even scored a try!

Above all I think both of the kids had such a nice time, because they really got to bond with their team mates. We spent seven (!) hours at this tournament today, and there was a lot of waiting/playing around going on, which is kind of all part of the fun. Also, I think they both grow immensely with each experience of competition in these tournaments.

Luckily, we didn't have to come home empty handed, even though there was no wins, as everybody got a medal! Yay! 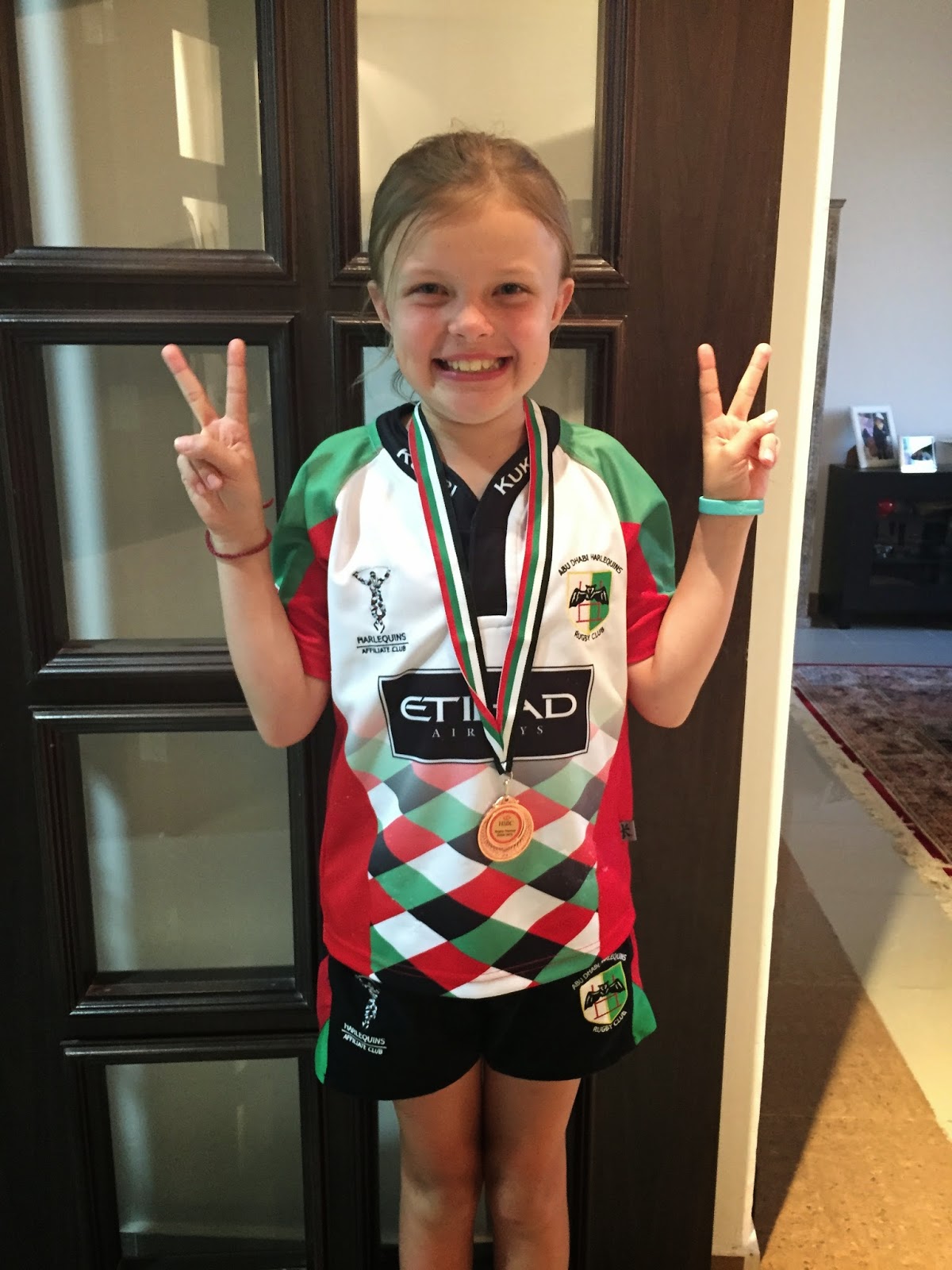