Yes it really felt like another first day of school yesterday!
Lucas was finally going back to campus again, for the first time in 208 days, as thankfully ADEK had now given permission also for Grade 11 and 12s. All younger kids up to Grade 5 have been going to school all term already, but unfortunately (and for some reason I fail to understand) the MYP students in Grades 6-10 are still supposed to continue with their e-learning. So Linnea keeps studying at home, now it's just said "until further notice"... arrghhh.

So, six and a half months later, the alarm was set at 6.15 and I got up early preparing his lunch box, and drove him off to school. He was, in his own teenage way, quite excited to go back, and to see his friends again.
New uniform this year - white shirt with black piping, and black trousers, for the DP program. 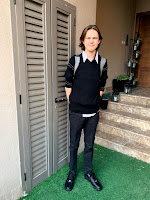 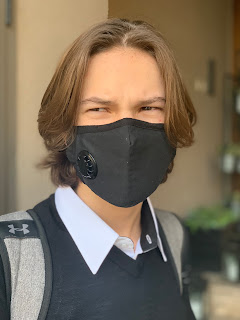 Coming home he didn't have much to say other than that it had felt very safe in school with all the new precautions in place. School is well prepared and have been working very hard for the past months to accommodate all changes in regulations, to be able to welcome all students back on campus.
Wearing a mask all day long of course is not so much fun, but if that's what you have to do, that's what you have to do.
Now the next thing will be to try and get that hairdressers appointment sooner rather than later...