Day 48, Sunday 26 April
Another Sunday, another week of school. Now with Ramadan timings, so kids don't start until 9.30 in the morning, good sleep-ins.
I had trouble sleeping again last night, I don't know what it is. I have trouble falling asleep, I keep waking up because I get really hot and I have these weird, weird dreams all through the night so I wake up completely exhausted in the morning. Both physically and mentally.

Today I did no jobs, other than the normal Sisyphus chores, tidying up, dishes, hanging washing, folding washing, emptying the dishwasher, cooking etc... Argh, they become even more tedious when there is nothing else to mix them up with. It seems like I've lost my mojo after having sorted through pretty much the whole house. I tried to read a book but fell asleep.
It should have been Grandad's 72nd birthday today, so I made a nice pavlova for dessert though. He would've liked that and it was really fluffy and yummy. 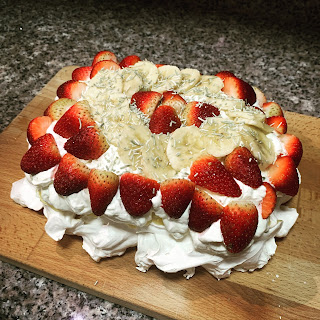 Day 49, Monday 27 April
For a few minutes after waking up this morning, while I opened the curtains, it felt like a completely normal day. That feeling though, when it dawns on you that no, no it's just another Groundhog Day, that feeling is so heavy... But the first cup of coffee is always a mood lifter, and the sun was out at least.
Turns out it took me a while to get going this morning, but I did do my workout after initially thinking I'd skip today. The urge to keep my streak going is strong!
But apart from that, and baking some bread, I haven't done much. Again. Some days the highlight is waiting for the Amazon (or Aramex) delivery guy, ha ha, even if he is just coming with more disposable gloves and face masks.

The pasta team tried their hand at some filled ravioli today - pretty successful, they were absolutely delicious! 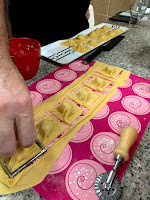 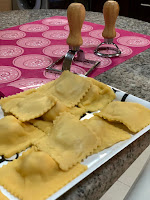 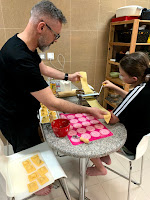 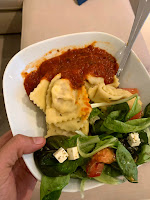 Day 50, Tuesday 28 April
Tuesday! Cleaning day! It seems to take us less and less time to clean the whole house, but I'm actually not sure it is because we are getting more efficient... ha ha. Lucas just can't get his head around why it's necessary to clean - "it's just going to get dirty again" - and especially not in places where nobody sees anyway; and Linnea asked me what I was doing vacuuming the kitchen the other day - "but it's not Tuesday!". Well baby steps, at least I have got everyone doing the cleaning, once a week, working as a team. We will work on the 'why' a bit more with time I guess.

In other news we got a giggle this morning reading the reports from NZ where they have now moved from Level 4 down to Level 3 (=eased the restrictions a bit). One of the headlines in the national newspaper was "The queues to Maccas cause traffic block", ha ha! They sure have their priorities right - first things first, let's go straight to the McDonald's drive-through!

Day 51, Wednesday 29 April
It's been a big day today with multiple activities all around. This morning the kids were home alone, at school, for the first time in weeks and weeks. Nathan went to work, flying a freighter flight with medical supplies to Kathmandu, and I went to the - hairdresser! Nail salons and hair dressers have been allowed to open again, but with a number of restrictions of course.
I got my temperature taken upon arriving, had to sign a form I had been self-isolating, and both Daisy (my hairdresser) and I wore masks during the whole appointment. 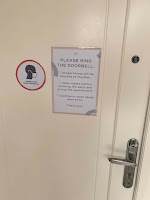 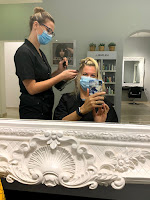 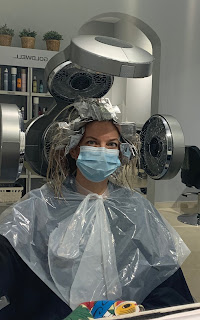 I got seated on the second floor, and was all alone up there, so social distancing was no issue even though every second seat was blocked off. 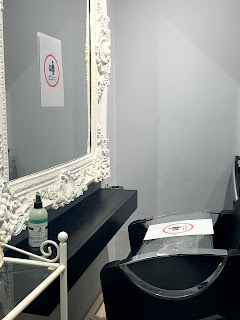 It was nice to feel a tiny little bit of normal for the morning, getting fresh hair was almost just the bonus! 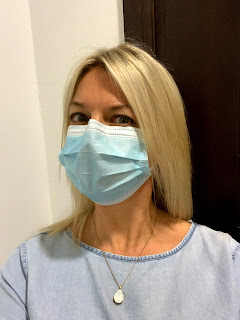 As soon as school was out, it was time to go do the weekly shop. Lucas had asked to come along this time which was good as he hadn't been out of the house for about month I think. Smallest shop so far in these Corona-times, I guess we have been good at stocking up previously.

Day 52, Thursday 30 April. Valborgsmässoafton
Another phase of this Corona-circus started for our family today: apart.
Nathan will now spend the next 24 days in a hotel here in Abu Dhabi. The company put the pilots up in hotel accommodation for periods of three weeks while they fly them every few days (as soon as their C-19 tests come back negative after their last flight). Not so great to be apart and not so much fun running the show by myself here at home, but I guess at least the kids and I are the ones better off having all our stuff, and each other. Nathan is stuck in a hotel room without a balcony, the pool and gym of course are closed, and he gets food sent up in boxes from room service three times a day. Not so much fun. But, we will get through this as well. One day at a time.
Posted by MrsW at 17:19