Day 35, Monday 13 April
Shopping day. I am so proud I managed to stretch it from last Saturday until today. Actually, if it wasn't because the kids are not fans of the longlife milk for their morning cereal, we probably could've waited even another couple of days. There was a lot less people today than the last few times we've been, which was nice.
We also heard that they have opened up IKEA again, with shorter opening hours but still! I got so excited, not because it's IKEA, more because it feels like a step towards the next phase. But maybe I'll have to make a quick trip there anyway this week, there is always something you need in IKEA, right?

This afternoon we had a Zoom call with our friends the Turners in Brunei, which had been a long time coming and was really nice. Both families in front of the screens!
Oh how I miss them! 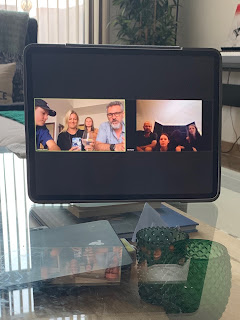 Day 36, Tuesday 14 April
Tuesday again already - which means cleaning day!
As Nathan had his first day back at work after his leave so it was up to the three of us to do the cleaning today, ugh. But after a slow start we got going, and then there was just no stopping us! As they say: "That escalated quickly!". 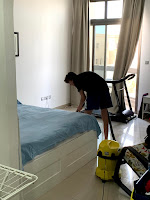 Ha ha, before I knew it the whole sofa was in pieces and we were giving the sitting area a GOOD clean! We found all sorts of strange things under the sofa, so not sure when that was last done... 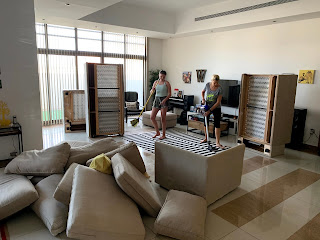 I also cleaned out the big wooden shelf in the kitchen and the cutlery drawers. Those jobs that are never really prioritized but it sure is satisfying with order, even inside things where nobody else sees! 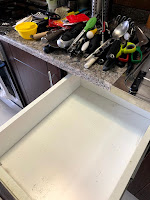 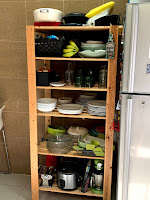 For dinner we tried out our new pasta machine for the first time today. I made the dough in the Thermomix, and then Linnea gave the machine a whirl. We started to do it together but she wanted to to it by herself, and she did a great job! 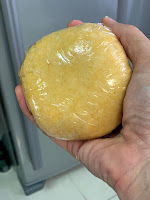 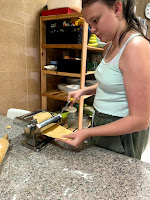 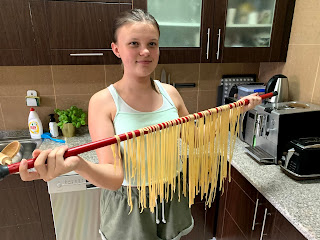 For a first attempt, it was really tasty, but not enough for four hungry people - so next time we will double up on the recipe, and also maybe try some filled tortellini or something! Considering it was a lot easier than I expected, I can see us doing this a lot more often.

Day 37, Wednesday 15 April
Once I finally managed to fall asleep last night, I managed to sleep better than I've done in many days. Even so, the rest of the day has just gone by in a grey blur. All the energy from yesterday was gone and instead I have been lying on the bed staring out the window most of the afternoon, just been moving from one spot to another to make time pass all day. We actually had rain on and off all day, which was kind of cosy, but it makes the skies so dark and dull that I guess that affected my mood too.
At least I tried a new recipe for dinner which was a success, lamb rolls (in home made bread) with tzatziki and Greek salad, yum.

Day 38, Thursday 16 April
Today was a really good day, in many ways. First I had a really good workout in my 'Escape Room' (as a friend named it) in the morning. I was on fire and had so much fun, I just kept going and going!
Then after school Linnea and I went to IKEA. Yes! As I had heard earlier in the week that it was open again, I had planned already then that I should go today. Honestly no, I wasn't in need of anything essential (apart from 'Kalles Kaviar' which unfortunately they still had no stock of), but I was in essential need of an outing which would feel somewhat normal. So we went. Got our temperature taken at the entrance, wore our masks and gloves and kept our distance. 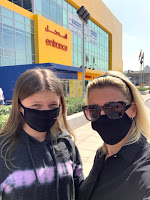 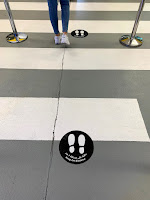 In case you have trouble gauging how far 2 m is, there is stickers all over the floor in the whole shop showing you. We got some new cushions for Linneas room, and a huge amount of plastic boxes, some shelves and other things which will help in my organizing frenzy.
Then finally in the evening we had take-away for dinner to celebrate the weekend. Really delicious sushi, yum yum! Such a winner of a day! 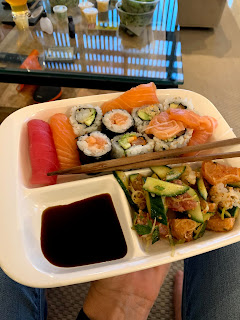