I've shown you the set up of my treadmill in the middle of the living room already, but since the first few sessions I've upped my game a bit. Or rather, Nathan has upped my game. That's what happens when you are married to Mr Gadget! 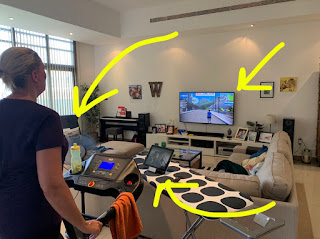 Yes have a look, I still have the fan going but also I have the Zwift on the big screen and the ironing board with my current tv-serie on the iPad next to me. It's all go go go! It's actually rather motivating to run around f.e New York, I keep thinking "let's keep going to that next light pole, let's keep going to that turn in the road" etc. (Zwift is a multiplayer online cycle and running program which enables users to train, compete and interact in a virtual world.)

To make it even better, while I was on my treadmill inside the other day, Nathan went on his trainer in the man cave outside. And for a short time (enough to grab this photo, ha ha!), we Zwifted together in the same world! 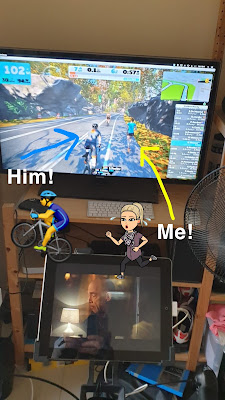