Have a look at this - they let anybody in these days: 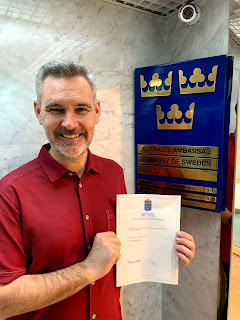 Well, jokes aside, it's big news - Nathan now has dual citizenship!
He's become Swedish!
And no, there are no plans on moving to Sweden. But... at least now we could, if we wanted to!

All this came about a bit by chance thanks to a conversation with a Swedish friend of mine in Dubai, who is married to an Australian. She told me they had applied for citizenship for him thanks to a special rule including having been married for over 10 years, having strong ties to Sweden, but not having lived in either of their home countries. So it got us thinking, maybe this would be a good thing for us as well?? Once it's time to leave this place, it would be nice to have all the possibilities open for us.

So, we submit Nathan's application too and were told that the handling time was up to 30 months. Ah well, we had no stress. So we got really surprised when we were told already after a few months that he had got his application granted!
The other day we passed the Swedish Embassy to pick up this beautiful proof of citizenship, and apply for his 'samordningsnummer' (CPR-number) so that he can get his new passport. 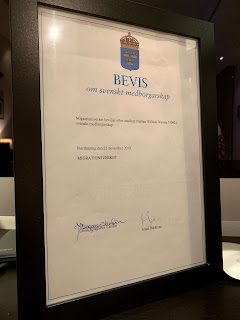 I'm feeling left out now - I'll soon be the only one in the family with just one passport! No fair!