Saturday afternoon I ended up doing a guided tour of the Sheikh Zayed Grand Mosque for the two Swedish sporting stars from the Swimming Festival - Sarah Sjöström and Christian Olsson. 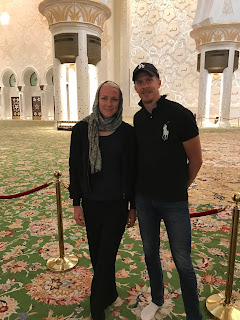 It came about during a short conversation at the swimming event that morning while we were taking some photos with them, that this was their first time in Abu Dhabi. Even though they were here basically only for the event, they told me the one thing they had hoped to have time to see was the Grand Mosque.
So - that was when I stuck them my business card!

Later in the afternoon when they had finished with the event, I took them to see the mosque. Unfortunately due to their busy schedule, we didn't have time for anything else than the mosque visit, but they thoroughly enjoyed their quick sightseeing.
I was very pleased I got to at least show them our most beautiful landmark - and happy to be able to share these photos of their visit here on the blog. (Of course I asked permission!) 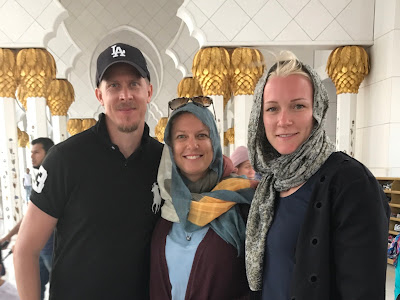