I arrived in Sweden with a suitcase weighing 11 kg but when I left it weighed 29,3 kg! Just on the limit! Full of Swedish food and goodies, a few gifts, some new clothes (for me!), and other things I had stocked up on.

I really enjoyed my drive back up to Arlanda airport, even though it was a long four plus hours. It's a bit boring when you are all on your own and have nobody to talk to, but the scenery was breathtaking. I kept "fueling up" on all the green hills and the yellow fields along the way. So pretty! 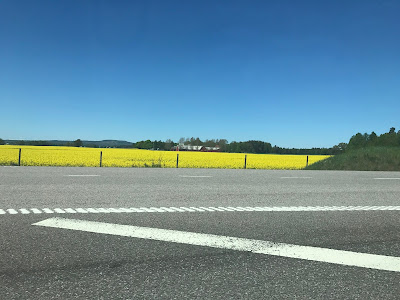 I also made a pit stop in Västerås to catch up with an old friend of mine, Maud. I went to Paris those 25 years ago, after I had graduated, to become an Au Pair. I took over a family from Maud, and as she stayed on in Paris with another family, we spent most our weekends together that whole year. 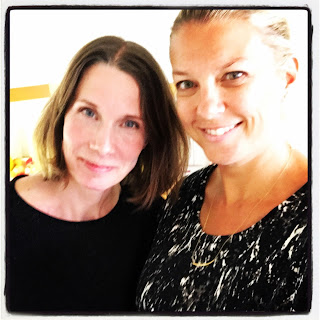 It was great to catch up again, so lovely to see the fabulous apartment where she lives now and meet her family. I hadn't even met her 8-year old son before, and her now 14-year old daughter was a toddler last time we met!

For this trip I had booked with Qatar Airways for the first time. The advantage with Qatar is that you get to fly from and to Abu Dhabi, the disadvantage is that you have to transit in Doha. On the way there I only had a little over an hour there, which made the trip about as long as when we use Emirates out of Dubai. On the way back I had over three hours though... Bleeerrghh... Anyway, gave me time to have some proper coffee, and check out the famous giant teddy bear: 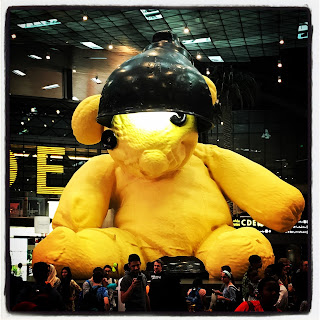 This is actually a sculpture, made out of cast bronze. This sculpture called 'Lamp Bear' was designed by Swiss artist Urs Fischer. It is 7m tall, weighs approximately 20 tons and it was acquired by the Qatari Royal family at an auction at Christie's for $6,8 million! Don't miss it if you travel through Doha, it's quite impressive!

Anyhow, it is good to be home again even though it is only for another four weeks, then it is time for summer holidays!
Posted by MrsW at 21:17