Grand is an understatement

Today I would like to repost one of my best shots of the Sheikh Zayed Mosque, one of my absolute favourite places here in Abu Dhabi: 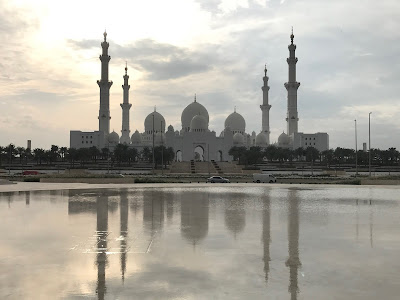 I just read yesterday that the Grand Mosque was just announced to be ranked, once again, second on the popular travel site TripAdvisors Travelers' Choice list of most popular landmarks around the world. (It was only beaten out by Angkor Wat in Cambodia.)

Every year TripAdvisor let their users vote on the worlds' top hotels, airlines, beaches, museums, restaurants, attractions etc; and according to their users, the Sheikh Zayed Grand Mosque is the 2017 second most popular landmark IN THE WORLD.

So what are you waiting for? Book a flight, come stay in our guest room and go visit the most beautiful mosque in the world!
Posted by MrsW at 09:13