On the Saturday we got up even earlier, as Linnea had a 7.45 start down in Dubai, and the fog was there again, even thicker. It hadn't even lifted by the time we got back to 7he Sevens! 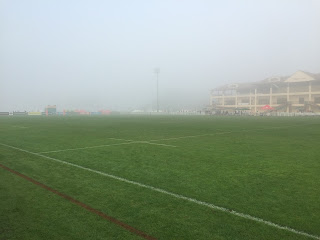 The U12 Girls put in FOUR teams in the tournament. Linnea and her team played really well, they won all of their pool games, and ended up in the final! 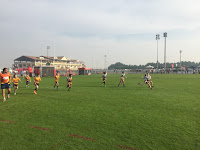 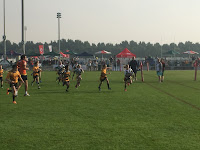 Linnea has had a bit of a breakthrough lately, having finally figured out that she has a good eye for where there are gaps in the defense - and if she gets the ball at the right time, she goes for it without hesitation! She scored two beautiful tries, look at her go in the movie clip! (Ignore the crazy shouting Mum...) 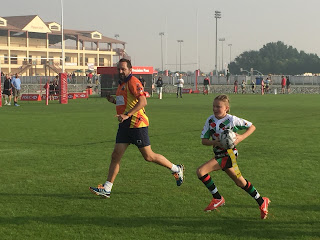 She also met up with an old friend from Brunei, who now lives in Dubai. Linnea and Ruby have known each other ever since even before Nursery Class, when they used to go to playgroup together. Here they are, back in Brunei, Christmas 2008 - and some seven years later, in the UAE: 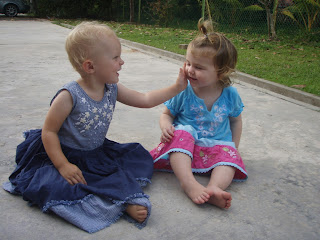 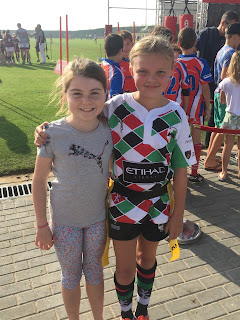 (We actually met up with tons of other friends from Brunei this weekend: half the Walker family, the James, the Mortons, parts of the Jack family and the Dehlis, of course! Fab!)

The team got some warrior paint on for the final: 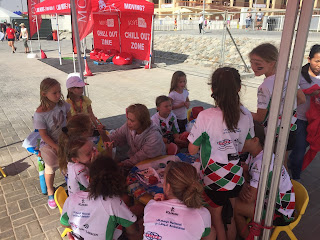 Unfortunately, the Dubai Hurricanes proved way too hard to beat. The Harlequins put up a strong fight, but the Dubai team played much better this time; with quick handovers, fast passes down the line and a super speedy girl that would outsprint our defense each time she got the ball. 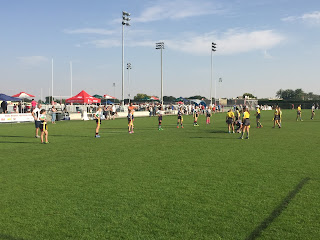 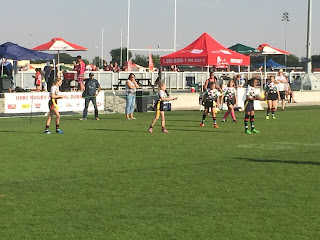 So the day ended with tears for many of the girls, it's a tough loss to loose, the final... But in the end, they played really well and above all, it was such a huge improvement to both their game and their attitude and commitment compared to last year - it was great to watch!
Well done Linnea!
Posted by MrsW at 23:30