It's still really hot and humid here in the sandpit, and September feels dreary and long. It's a perfect time of the year for indoor projects, so last week I started another one.
We've lived in this same house 4 1/2 years, and even though we did rather well furnishing it spot on back when we moved in, it's been a while and the kids have certainly grown up. We have moved around a few things in their rooms already, replaced their smaller desks etc, but now it was time for Linnea to get another upgrade - to a more "teenagy" room.

Inspired by her friends in Bunkeflo, she wanted a vanity similar to theirs in her room. Not really a necessity, as all bedrooms in our villa have their own bathrooms, but then again, the rooms are super spacious. I had a plan to sort out and get rid of some of her toys and make her room a bit more grown-up anyway, so why not.

It took three trips to IKEA and ACE (first I got the wrong mirror, then we also needed screws and plugs as they are not included in the packages here in the UAE), before we were done, and quite some effort from Nathan - but it turned out really well in the end. Have a look: 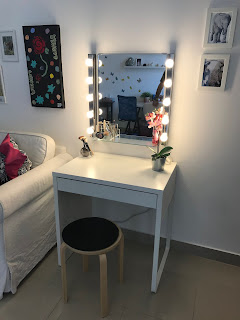 Linnea got really happy with the result, and it didn't take long before it was all kitted out with all her little things. The room sure feels ready for the next teenager in the house now! 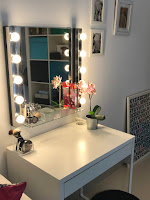 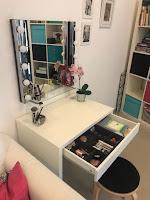