On our way back to Skara from Mölndal on our last day of our road trip, I decided to stop in at the shopping mall Allum in Partille, along the E20. I had bough a cardigan the day before and noticed a hole in it, so I thought I'd better try and return it as soon as possible.
We were only in the mall for little over an hour, in the middle of that Saturday afternoon - but when we got back to the car Linnea discovered that the window on her side of the car was broken. I got chills down my spine and shakes all over when I realised that someone had smashed the window, folded the passenger seat and pulled out and stolen ALL of our luggage!!!

ALL of our things were gone!!
They must have been really quick, as they had taken not only the three sports bags of clothes and a big plastic bag with dirty laundry, but also an empty cool bag.
Unfortunately they had also taken Linnea's backpack with all her little cherished things in it, and her Teddy and Pooh Bear she has had since she was a baby... Heartbreakingly sad.

It took all I had to try and calm down enough to be able to call the police. I was amazed that nobody came to ask if we were ok though - there I stood with two hysterically crying kids, glass all over the ground, and people just walked by with their shopping bags in hand back to their own cars.
The mall security guards who came out to see us (after I had called the Mall Information) informed us that there was no security cameras around... so no chance of identifying the perpetrators. 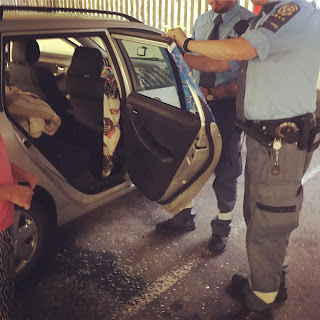 After I had settled down a bit more, we drove around the neighbourhood for a bit to see if by any chance the thieves had realised that all they got was dirty clothes and shoes and maybe had dumped the bags somewhere, but no luck.

I was terribly shaken, as were the kids. This was an absolutely horrible experience and I wish it upon nobody. We had to go via a petrol station to vacuum the glass from the back set, and then drive slowly back home. It was a long way to go with a broken window, and with broken spirits...
Posted by MrsW at 10:09